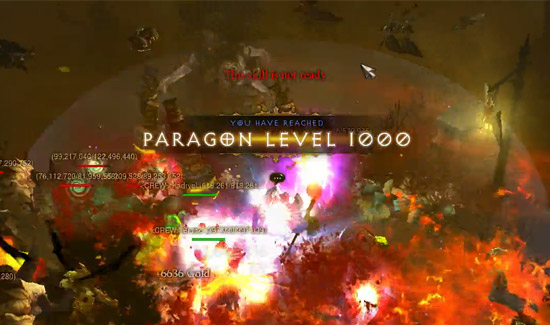 Huge congrats to Gabynator for reaching Paragon 1000, from the Diablo Nerds at Str N Gaming!

Remember when achieving level 99 in Diablo II was a monumental accomplishment? It would take me a million years to reach Paragon 500, let alone 1,000 in Diablo III. What most people don’t realize is that the XP to hit paragon 1000 is not 10 times the XP to hit 100, no, it is exponential! In order for Gabynator to hit level 1001 now, it will take the amount of XP from the first 244 paragon levels combined! So that should give you some idea of how much of an achievement this truly is.  However, he did not do this alone.

Gabynator had a guild behind him, friends to help him with Malthael boss runs, and rifts on the highest difficulty (Torment VI). So, perhaps this is a bit of a shared victory, not just by his guildmates but for the entire Diablo community. Yes Blizzard we have no lives, and we aim to beat all your games!

Here are the crowning moments from Gabynator’s TWITCH archives