Home › Preview › Lego Dimensions: 5 Reasons You Should be Excited

Lego Dimensions: 5 Reasons You Should be Excited

It’s no secret that I absolutely LOVE Legos, they give me a way to distract myself when I’m bored, but one of the greatest prospects of these little blocks are the Lego video games. I remember how excited I was when I received my Brickmaster Magazine issue in February 2005 and heard about the very first Lego game, Lego Star Wars (the prequels, not the original trilogy, unfortunately). Since then, I have matured, and so have these games. Since the days of Star Wars, we’ve gotten Lego Batman, Lego Indiana Jones, Lego Harry Potter, and of course the highly coveted Lego Marvel game (review here). One that has come out THIS year is Lego Jurassic World, which has been garnering mostly positive reviews, but I’ve elected to ignore this on account of the new bad boy on the street, Lego Dimensions. Lego Dimensions is a toys-to-life style of video game, much like Skylanders and Disney Infinity. I think this game has a quite bit more running for its money, and I’m here to tell you what that is.

1. The Variety in the Different Properties

One of the biggest selling points of this game are the many properties fueling the levels of it. It’s interesting to see certain characters together on-screen, case-and-point the Doctor from Doctor Who and Doc Brown from Back to the Future, or seeing Emmet from The Lego Movie and Owen Grady from Jurassic World (both characters are played by Chris Pratt). That being said, there are also a few properties in here that have already been made into Lego games, thus negating the need to get those games, and saving some more money. It’ll definitely be fun to see this major crossover happen, speaking of which…

2. EVERY Character Is Compatible in EVERY Level 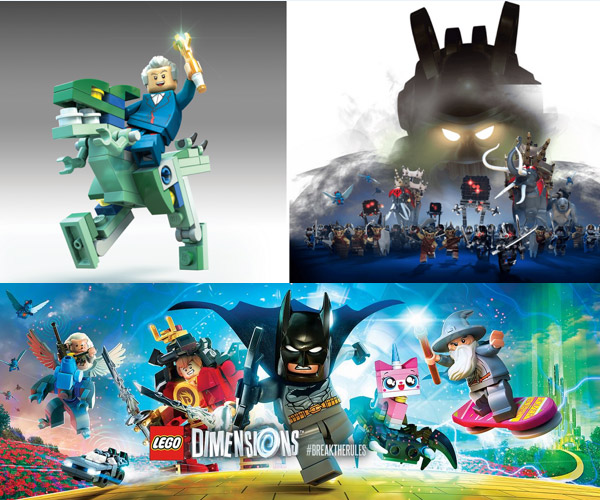 This is a problem that was big with Disney Infinity that got on my nerves, and was always in the back of my mind. In Disney Infinity when playing the story levels, you had to have a character from that particular level set (Iron Man for the Avengers, Sulley for Monsters University, etc.). This game takes that weakness, and turns it into a strength. There are even scripted crossovers in the levels that are absolutely bonkers. For example, say I’m running around in an Aperture Science Test Chamber as Aquaman (which I would never do because Aquaman is lame), and all of a sudden Homer Simpson comes in on a wrecking ball and clears a path for me to portal through. It’s so interesting to see the crossover capabilities in this game, you can be riding in the batmobile through Hill Valley square as Chell from Portal one minute, and fighting off some stampeding Oliphaunts as the Stay Puft Marshmallow Man the next.

All of the things you put on the portal are ACTUAL Legos! The thing that allows them to appear in the game are the bases they are standing on (apparently the micro-technology used in them took a long time to develop, hence why we’re getting this game 10 years after the initial Lego games). This is the other problem that I had with other toys-to-life games, the toys only are useful as game accessories, and when I’m not playing the game, all the Skylanders do is collect dust in my closet. When you buy Lego Dimensions, real Legos are included, and they make it part of the experience to assemble the portal, the vehicles, and the characters. That being said, this leads to the biggest negative of the game, it is expensive as a golden turd. The starter pack runs at $99.99, a story pack (includes 1 character, 1 vehicle, and 1 gadget) costs $29.99, a team pack (includes 2 characters, and 2 vehicles) costs $24.99, and a fun pack (includes 1 character, and 1 vehicle) is $14.99. On the bright side, they do compensate with the starter pack, you get a slew of levels that are exclusive to the pack, and you add on levels with the level packs. That being said, there are endless hours of fun to be had with this game, and I personally think it’s worth it to have that great moment when you think, “Hmmm … should I saddle up on a velociraptor, or on a Dalek?”

The best part about the in-game content is the authenticate nature of it. When you die as the Doctor in the game, you regenerate as a different version of the doctor. The characters have animations they do when you’re away from the game (e.g. Owen Grady pulling out a couple of toy dinosaurs and messing with them). But the most accurate thing that follows the source material is the dedication to having the original actors play the characters. Peter Capaldi plays the Doctor, Ellen Mclain plays Glados, Dan Castellaneta plays Homer Simpson. It was such an awarding experience to hear Steven Merchant deliver moronic-sounding lines as Wheatley again, and to hear Chris Pratt being both a complete badass as Owen Grady and a fun-loving guy who thinks that everything is awesome as Emmet. The people at Traveller’s Tales have made it very clear that they are fans of these franchises, and It’s made very clear when you see the Wicked Witch of the West give a convincing maniacal cackle, followed by her flying off with an army of flying monkeys.

The biggest reason to buy this game NOW is the fact that the makers of the game have illicitly said that the portal and the pieces will never become incompatible. Sure there might be a new game with a disc and new features, new kinds of objects, and new achievements, but the way Traveller’s Tales have designed the portal has been so robust that you never need to spend a hundred buckaroonis to buy a new starter pack, which is again why I think that the large price tags are worth it, if you take an interest in the game series. It’s inevitable that you have to buy a portal, and it’s easier to just pay for it for the first game, and save so much cash on the sequel.

Now you know why I was so excited for this game when I first heard about it at comic-con, and either you want to buy the game immediately, or you want to punch me in the face (If you are at that point, why are you still reading you weirdo?!). No matter what, make sure to keep it locked here at Strength in Gaming, and be sure to tune back in for a review in a few months or so.