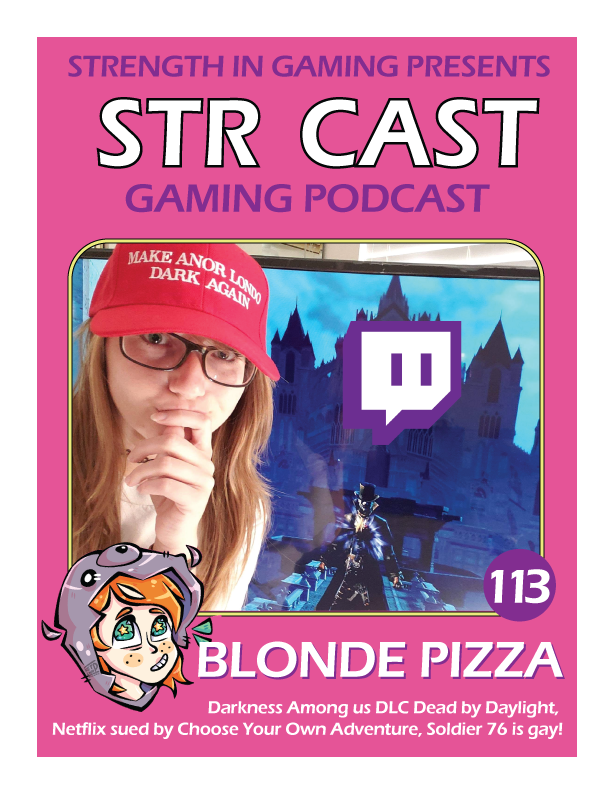 On this hilariously informative episode we had the opportunity to interview Blonde Pizza an accomplished Twitch streamer and YouTuber! We discuss Darkness Among us DLC for Dead by Daylight, Netflix is being sued by Choose Your Own AdventureTM, and Soldier 76 is gay!

“Strength in Gaming are real gamers. We’ve burst from the womb with dice in one hand, a tit in the other, and the glow of bits in our eyes. We are here to tell it like it is, no bullshit, just the fucking truth. This is Strength in Gaming!”
FIRST HALF

Bandersnatch (watch it free on NetFlix)
– A choose your own adventure black mirror
– I liked how I felt like I was part of a black mirror episode, however it left something to be desired, I know the run time said 1.5 hours but It felt too short. Like nothing really happened. it’s almost like an interactive trailer for a cool new point and click adventure.
Will poulter left twitter because of bandersnatch trolls
Surprise Soldier 76 is a homosexual? who cares Polygon think’s its news
SECOND HALF
Ballsy Blonde / Blonde Pizza Interview
– Interview questions
Favorite Game?
What made you start streaming?
What was your coolest twitch/YT moment? What made you feel like you made it or were a big deal?
What are some of the creepiest comments you got while streaming?
What is the story behind your Screen Name Blonde Pizza?
Fave Souls build? Dex, Str, Int, Faith?
– Give time to plug her channels / social media etc.
Posted in Podcast