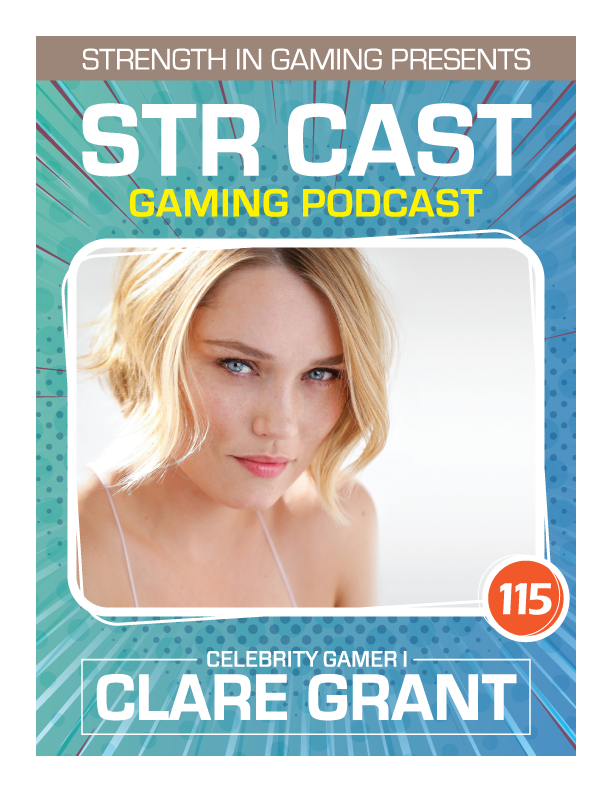 The Strength in Gaming crew get down and Nerdy with celebrity guest Clare Grant! We had so much fun getting to know Clare and her gaming habits! You will be surprised by just how much of a video game nerd Clare is, we certainly were!

Clare Grant next stars as one of the two female leads in Changeland, the feature directorial debut of Seth Green. Grant also starred in 2018’s Dance Baby Dance, 2016’s Holidays, which debuted at the Tribeca Film Festival, and has several soon-to-be announced films coming out this year. Grant always knew she would be an actress, but she grew up fascinated by science, math and technology. During Junior High and High School, Grant moved to Clear Lake, Texas, right next to NASA’s Johnson Space Center, which further fueled her love of space exploration.  As an adult, she sought out shuttle launches and visits to science centers all over the country. In 2016, Grant utilized her appreciation of science as one of the producers on a science news show, “Blame it on Science,” in partnership with Lionsgate for their Comic-Con HQ digital network.

Grant made her feature debut opposite Joaquin Phoenix in a small but pivotal role in the Golden Globe-winning film, “Walk the Line.” Grant earned her theater degree from the University of Memphis in her Tennessee hometown. While there, she met director/filmmaker Craig Brewer, who cast her in her several indie films. When Grant moved to Los Angeles, she quickly landed a leading role on the Showtime series, “Masters of Horror.” Grant returned to Memphis for a leading role in Brewer’s feature, “Black Snake Moan” and then as the star of his MTV series, “$5 Cover.” Grant continues to work in various film, television and voice-over roles including “MAD,” “Robot Chicken,” “Clone Wars” and “Hulk and the Agents of S.M.A.S.H.” Grant was the lead guest star in an episode of “Castle” as well.

As a producer, Grant created geek genre projects including the viral sensation, “Team Unicorn: G33K & G4M3R Girls,” which stirred controversy over its sexy portrayal of geek girls. She co-created and produced a pilot series for Adult Swim. Grant also won two Lucasfilm Fan Film Awards for Best Action and Audience Choice for “Saber,” the short film trilogy she starred in and co-created.

What was the first video game you remember playing?
Your preferred video game genre? FPS, RTS, RPG etc.
What is a video game you are currently obsessed with? What’s the one video game you find yourself playing over and over again?
In the Team Unicorn video G33K &G4M3R Girls you appear in Lara Croft cosplay, was that your choice, are you a fan of Tombraider?
Whimsyshire “Killaire”, “Miss Hell”, “Maulin Sorely”, “R’Lyeh” Team Unicorn Easter-egg in Diablo III, how’d that happen?
Any specific video game franchises you would like to work with?

You said in an interview once that video games have taught you many of the valuable lessons you’ve learned in life. What has been the most influential life lesson you’ve experienced from a video game? Which game was it?
If you could be a video game character in real life who would you be?

Favorite Cosplay so far?
Are you working on a cosplay at the moment? What are some cosplay ideas you’re dying to try?
Where do you go for inspiration / favorite fellow Cosplayers?
Upcoming cons / events?

You were on the chess team in school, do you still play?
What tabletop are you into these days?
Magic the Gathering, how long have you been playing, since which set? And what is your favorite color deck?
Have you played any of the MTG video games such as Arena?

Your latest projects, what are you having the most fun working on?
What is the nerdiest project you are working on right now?

Strength in Gaming’s #1 Fan “Prem”:
What DnD class do you prefer?
Do you play Fortnite?
Anime or Manga?

Star Wars or Star Trek?
Any plans to work with Felicia Day again?
You’ve worked on the MAD TV Series, did you ever read the magazine growing up?
Do you play co-op with fans?
Your favorite Mass Effect game? How did you feel about Andromeda?