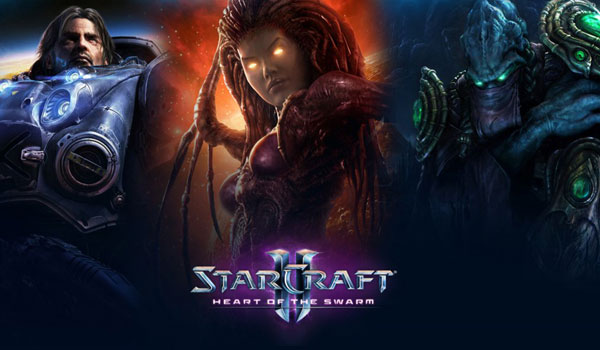 By Carl Houtz
Watch The Video Jumping into Multiplayer: Starcraft 2 on YouTube Now! Be sure to read the article below for the full lesson!

We will being with Starcraft multiplayer because it is a game that I have been a passionate fan of for over 15 years. Starcraft 2 has one of the highest skill caps of any multiplayer game. This often intimidates people from getting into the multiplayer but there are so many resources available to prepare that it is just silly to ignore them.

For the brand new player: play through the single player tutorial and at least 5-10 single player missions on easy or normal difficulty. You will start to get a sense of how certain units work, how resources are collected, and how to build a base and an army. Are you enjoying the single player? Good, beat the game. It doesn’t take a long time and the cutscenes and story telling are fantastic. If you really fall in love with highly recommend jumping right back into it on very hard or brutal difficulty as you start dipping your toes into multi-player. 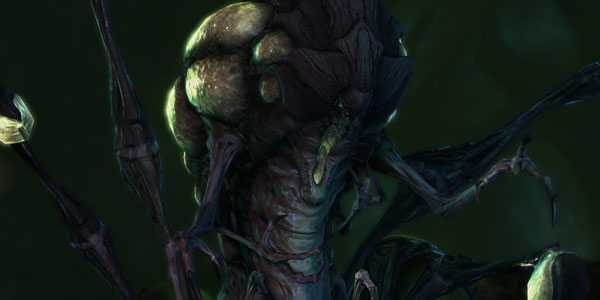 Greetings initiate! I’m here to give you some tentacles on training!

Really itching to try multiplayer after 10 missions? Then play 1v1 vs AI. The game will automatically match you against a low level AI and increase the difficulty the more often you are winning. The new starcraft 2 AI is really nice because it chooses a pretty diverse set of strategies, something you have to prepare for when going against other players. Another step that will give you an edge is go to options [esc or f10] and click on “hotkeys”. From here you will can mouse over every unit from every race and learn all of their abilities and hotkeys. Doing this will alsthe slight differences in units between the single player and multiplayer as well as what sort of beo give you a good idea of ast you are about to wrestle. Keep in mind that any command or ability can be re-bound so if it feels weird then change it!

Another great step before jumping into multiplayer is at least try all of the “challenge missions” which can be found in the campaign tab. These are a really fun way of exploring tactics and unit counters that you will use when going against over players. This is also a really good way of deciding what race you want to focus on playing the most in multiplayer. Getting a gold rating on all of them is a fun challenge. Even if you play starcraft multiplayer all of the time. Achieving these gold challenge missions, going for the single player achievements, and beating the game on brutal will help your mechanics quite a lot.

Finally the best way to truly understand the nature of the beast you have challenged in Starcraft 2 is to watch the game at its lowest levels here: Bronze League Heroes – StarCraft 2 and then at it’s absolute highest level here: SPL 2015

Marvel at the chasm between the two and realize that there are people who play this game full time, all day everyday and that the growth of esports is an exciting thing to be a part of. Also realize that just because you can’t play like a Korean doesn’t mean you can’t enjoy the multiplayer immensely. Click that matchmaking tab and start getting into ranked 1v1. You will have 5 placement matches for league placement and I would be willing to bet money that you end up in…

Bronze League: Welcome to Starcraft 2! Everyone who has ever played Starcraft 2 started out in bronze league. I’m going to try my best to give some tips for each league up to where my expertise runs out [about diamond league]. Bronze league is a complete crash course of an experience. Just know this: it is the blind fighting the blind. Nobody really understands exactly what are the best units or strategies. I cannot stress enough to just keep fighting. The game will technically end when all of your buildings are eliminated so until that is happening you should stay in the game and keep fighting! I have done this myself where I try an attack that gets shut down or an opponent attacks me and does what I believe is significant damage, only to look at the replay later and realize that either I did enough damage and should have kept fighting or the opponent had to cut a lot of their economy in order to do what damage they did, ultimately leaving a pretty even game that should have been fought out. I remember one of my bronze league games where a zerg player completely destroyed my main base but I had a second command center that I just flew to another side of the map and started rebuilding outside of his vision so much that I ended up winning the game. Good times in bronze!

In terms of mechanics your goal in bronze league should be to never once stop creating workers and never get supply blocked. Each unit in Starcraft requires it’s own supply count. The maximum supply count in the game in most cases is 200 supply. A worker is 1 supply. A base in Starcraft should have 16 workers collecting minerals and 3 workers per vespene gas geyser. As you build different tech buildings, the amount of supply for each unit you create will go up depending on how powerful that unit is. So as you build more units and workers you will have to build more supply depots, pylons, or overlords in order to continue building uninterrupted. Your goal in terms of army is to have an army. If you gather more resources than your opponent and are able to convert them into an army more quickly than your opponent, most likely you will win the game. The quicker you can spend the money you are mining the better. The larger army in Starcraft almost always wins.

A quick side note: The matchmaking and ranking system in Starcraft is not always an exact science. However, as you keep playing the system is designed to ideally keep the player around a 50 percent win rating. So as you keep winning games above a 50% win rating the game will start matching you up against higher ranked opponents. A league promotion will normally come after a loss so if you are enjoying the game and playing regularly, eventually you will start to rank up.

Moving through silver and gold league will definitely be a learning curve for the newer player. Those 2 leagues account for over 40% of everyone playing the game right now. So, as mentioned previously, when you do lose a game it is vitally important to watch your replay and understand where things went wrong. And, more often than not the reason for lost games in these leagues is insufficient scouting as well as avoidable supply blocks. Ideally you will want to build between 60-70 workers spread across 3+ bases if the game goes that long. Try to never stop building workers and always start building your supply building/unit ahead of when your supply cap. For instance if you are at 23/27 supply you should start building another depot/pylon/overlord because by the time it finishes you will have built a few more workers and army units and just about be at 27/27 by the time the building finishes. Supply blocking yourself is like putting yourself on pause while your opponent continues playing.

In Starcraft, knowledge and vision can be considered the most vital currency. What buildings is your opponent making? How big is their army? Where is their army? Are there any hidden bases on the map? How many bases does the opponent currently have? What are the opponents upgrades at? If you find yourself not knowing the answer to these questions then you need to be scouting more. Each race has a plethora of tricks for getting this information but the most basic form and often the most important is to just send 1 unit that is low cost, often a worker, to go look for any information you can get. You should also be fighting your opponent for control of any watchtowers on the map that grant a large radius if vision.

These leagues are also where you will want to develop a good system for using control groups. You will want a hotkey for your bases, one for your upgrade buildings, one or two for your production buildings, and 2-3 for your army units. I will almost always set my scouting unit to a hotkey as well so that I can jump back to it quickly and get more information before it dies horribly.

In these leagues you will have to refine your micro management of your units and appropriate reactions to the things you scout. Learn to set and use camera hotkeys in order to more quickly jump to set locations on the map. You can change these in the hotkeys menu under global and then under the camera tab. Look for “set camera location” and “jump to location” hotkeys. Typically I am using control + F1-F4 to set my camera locations and then just F1-F4 in order to jump to them. Not having to scroll to the edge of the screen in order to move your camera each time will allow you more time to set up a good defense.

Another tip to help with micro management in large battles is to have your army separated into about 3 control groups. If you are a protoss player and set your high templar to a separate control group you will be able to switch to them and get off the perfect storms more quickly than if you only had your entire army on one control group and were trying to tab through your units in order to select them. If you are terran playing with marine/x/medivac against a zerg player who has plenty of ling/baneling. When you are about to get into a battle, control click on your marines to select all of them and pull them back so that the banelings get inefficiently traded onto your marauders or hellbats. Learn how to shift command your units. In terran vs terran this becomes extremely important if you are in a tank/viking war. Select a tank that is sieged then hit E, hold shift and click on where you want it to move to and hit E again. The sieged tank unsieges moves and resieges in that location while you are already off controlling something else. The amount of shift command tricks in this game is immense.

Look in the arcade for micro-battle mini games. There is one call “Starcraft Master” that is a micro mini game that was developed by Blizzard specifically to help improve your unit control.

I would say also that it is helpful to develop a handful of different builds to try against each race and write them down somewhere. Don’t be afraid to try aggressive plays but understand what you are sacrificing in order to make them happen. Finally I think the best tip for improving your Starcraft play is to find a few people who you can practice against in unranked custom games. You will both have fun and improve significantly.

Thanks for reading! If you are looking for more inspiration keep watching Proleague games. And feel free to get in touch with me on Battlenet for further explanations or to practice. [Talkshowhost #1319].

P.S.  You can check out more videos/guides in this series as I post them here as well as on my youtube channel [see video above] or on http://gameanon.com/