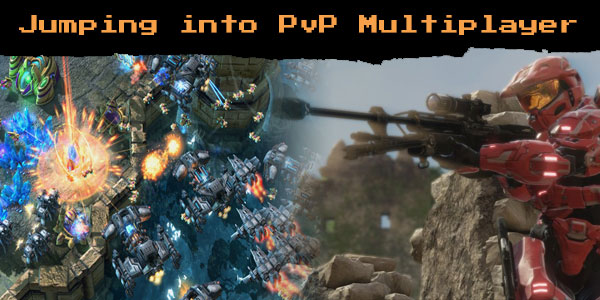 Greetings gamer. I wanted to lay out some introductory guides for the player vs player multi-player experiences that truly add an infinite level of replay value to certain games. For my whole life the longest lasting games and the ones I have played and enjoyed the most are games with a well rounded player versus player environment. The target audience for these guides will be anyone who is a gamer. If you mainly stick to single player or co-op experiences but are curious about the aspects of pvp multiplayer of a certain game, please get in touch with me and I will work on making a guide for it. I’m hoping that these guides will encourage people who are generally uninterested or intimidated by multi-player to give it your best effort and see if you enjoy yourself. If you are a seasoned veteran of any of these games, then hopefully you can find some advice to improve your tactics and maybe even improve your enjoyment of multi-player. Here are some things that I have found useful in all cases.

First tip: Embrace the cosmic noob within us all.

Everyone is, let’s say “less skilled” when they are jumping into multi-player for the first time. It’s okay, I promise. This should be the gaming equivalent of learning how to swim. I’m not going to recommend doing a backflip into the deep end if you can’t tread water. Playing the single player, tutorials, challenge modes, and checking out some videos of the multi-player in question will assure that you aren’t drowning on your first dip. Ideally you can find a friend or another player in game who knows what they are doing and basically act as their bodyguard. Don’t try to be a hero in your first match. Concentrate on learning every aspect of how the game operates. What are the talents, upgrades, weapons, power-ups? How often do they spawn? What classes have access to what tools? The multiplayer modes of any game (if they are decent) will have a symmetry in terms of what can be achieved by either team/player. You will be given resources and it is up to you to choose how to use them. However, this takes time. And sometimes the best way to learn how to effectively use a resource is to have it used against you. Which brings me to…

Second tip: Learn how to lose.

In the immortal words of pro StarCraft 2 player White-Ra, “More GG, more skill.”. What this means is,the more you play and lose, the better you will become. It also means that your skill overall will increase more through losses than through wins. This tip relies 100% on your mindset. You have to be able to mentally take a loss, and admit failure. The best thing to do after a tough loss is to take a break. Think about what the other team did to get themselves into a winning position. If it is possible, one of the best things you can do is to watch a replay of the game you just lost in order to more accurately pick up on how your team lost the lead. And finally, keep things in perspective. It is only a game. You really don’t need to shit talk your teammates just because your team lost and you’re convinced that the fault is 100% not yours. You definitely don’t need to write vitriolic forum/twitter posts aimed at the game developers telling them to kill themselves because their fat mommas on a swingset would be more balanced than this stupid game! You will get nowhere and look stupid along the way. If there are slight imbalances in gameplay there are tactful ways of expressing your thoughts. I, however, would recommend to stop externalizing these perceived issues and focus on overcoming them through being a better player. You have complete control over your own skill and almost no control over directly affecting game balance. Deal with it.

Are you a sniper, a wheelman, a tank, a healer, an aggressor, a rogue, a shape-shifter, a tech? Any of these gaming archetypes can be applied to a style of play within almost any multi-player game. What I can definitely say about any of these styles is that when it comes to team games the power is in positioning and information. Snipers will typically be weak if they are caught off guard in close quarters, but if they are diligent with map awareness then they would be able to predict where an attack will come from and adjust to it. If you don’t often commit to one style in particular then try to asses what role your team needs that currently isn’t being filled. Often you will find that the more diversity in tools and styles a team has the stronger they are as a whole. The diverse team will more often be able to find the best counter to a tough attack. This can be done most often through talent or character selection and weapon/vehicle selection. Regardless of your style you have to watch your teammate’s back. Saving your teammate’s life will often result in them being motivated to do the same for you.

In conclusion, multiplayer modes are the true final challenge and replay center of many great games.  However, the most challenging aspect of playing them is whether or not you are willing and able to accept failure and learn from it.  Teamwork, map awareness, and positioning are often the most important keys to success.  One aspect of a game that you may perceive as imbalanced can almost always be countered and outplayed.  Pick a style that you enjoy playing and become the final boss!