Contrast is a new puzzle platformer, developed by Compulsion Games and published by Focus Home Interactive. It’s a lightweight indie, available to download on PC, Xbox Live for Xbox 360, and Playstation Network for both the Playstation 3 and 4. I played the PS4 version, as Contrast was a day one free title for PS Plus subscribers. It took the slot once reserved for Drive Club, before that game’s delay to 2014. As a PS4 launch title, it is an appreciated bonus of the Playstation Plus program, but it plays…like a launch title. 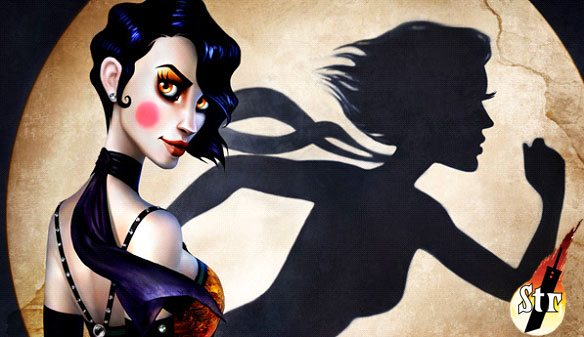 Meet Dawn. And her shadow.

You control Dawn. It is briefly mentioned at some point in the game that she is a trapeze artist, but she looks to be some kind of burlesque dancer. Her friend is Didi, a young girl who needs your help to keep her broken family together. Didi’s mother is a torch song singer in some jazz lounge, and is repeatedly shown to be too busy for her daughter. If she is downright neglectful of her child, I couldn’t say, but if you are so busy singing in a sleazy tavern as to not notice that your daughter goes out gallivanting off in the middle of the night with some 1920’s stripper with magical shadow powers, I should call child protective services on you. Just sayin’. Anyways, her father is a screw up of monumental proportions, and even young Didi herself remarks several times in the game that he can’t do anything right. Dawn has the power to phase into the shadows, turning the 3D world into a 2D platformer in several areas. She never speaks to Didi. Maybe I am reading too much into the barely existent story, but I think she may be an imaginary friend, a by-product of this latch-key kid’s overactive imagination. So when does this take place, and where? More questions unanswered by the game. The architecture and the sepia-toned graphics suggest maybe Paris during the gilded jazz age, but everyone speaks very plain, unaccented English. Except for the gangsters, who talk like stereotype 1930’s mobsters from the movies. “You’re going to make us big money with this circus, see?” They’re trying to shake down Didi’s dad who’s failed mob-backed business is a circus because that is a big business back in the 1920’s/30’s in the USA/Paris/Dream Land/wherever the hell this takes place.

The half-written story notwithstanding, Contrast does have a lot of great ideas that are fresh to the puzzle/platform genre. The idea of using a light source and switching dimensions, going from traversing a three dimensional world to climbing two dimensional shadows is certainly unique. 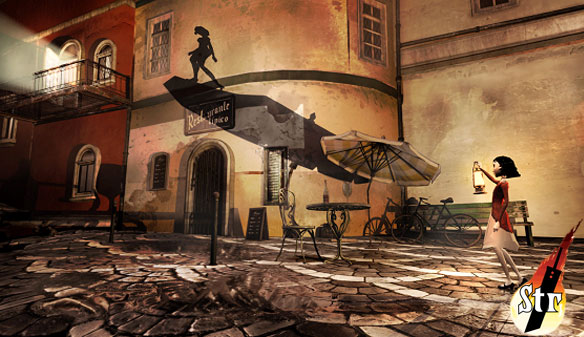 Can’t make it to that hard to reach ledge? Climb the shadows.

The shadow gimmick is really neat, when it works, but the problem, or one of them anyways, is that the control is really not good enough to rest the whole game on the back of the shadow segments. In better games of this genre, such as Portal or Quantum Conundrum, the controls feel fairly precise, and you are asked to master a certain game mechanic before moving on to another. Contrast just has the one mechanic of climbing on shadows to support the game’s flimsy premise, and it’s just not enough. It may not surprise you to find out then, that the game is not very long. I finished it in about two to three hours’ time, and I would have finished it a lot quicker, had I not been running up and down dead end streets looking for hidden objects and luminaries, these little balls of light that are hidden throughout the game. It would be great if they did something useful in the game other than needlessly prolong it. The game seems glitchy and buggy at times too, I got stuck in walls, crates, backgrounds, and all manner of things. The puzzles for the most part are pretty simple, and should provide little in the way of challenge if you’ve ever played one of these kinds of games before. 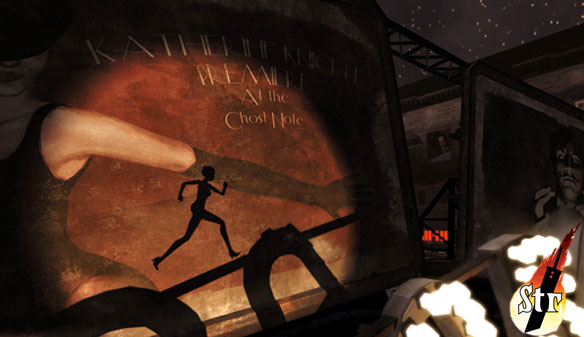 Contrast may find itself in the…shadow of other puzzle games. Hahaha. Oh boy.

Ultimately, Contrast has two major things going for it: the art style of the game is charming as all hell, and hey it’s free. Outside of that, I find it hard to recommend. Fans of platform puzzle games may be attracted to the novel concept of Contrast, but chances are, they have already played many other similar games with more varied gameplay mechanics, better controls, and more substantial length.