Home › Exclusives › Video Games: The Hits and Misses of 2014

Video Games: The Hits and Misses of 2014 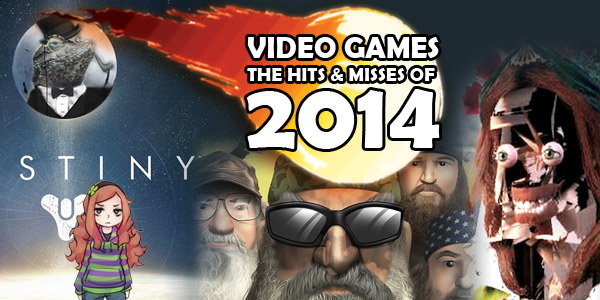 Here we are, another year down the hopper, and another few steps toward an open grave.  It has been an entire year since I wrote one of these goofball articles decrying everything that’s wrong with video games.  To the amazement of no one, and the consternation of myself, the video game industry continued to neglect my concerns, as King Koopa has long neglected his illegitimate children.  Things have gotten way worse people, and they are not getting better any time soon.  Need proof?  Feast your peepers on this year that was: the year of our Lord, 2014:

The Remastered Edition: As “the new generation of consoles” picks up steam at retail, and becomes “the current generation of consoles”, game publishers have discovered a neat trick.  They can take games that you bought on the PS3, slap on a 1080p coat of paint, and re-sell it to you for your brand new PS4.  It is incomprehensible that the best games of 2014 are the games we all played in 2013, but here we are.  Games like GTA 5 and The Last of Us were already bestsellers on last-gen, but by milking PS4 owners, they get to make more sales without adding much to the game they pressed to disc the year previous.  This heinous trend is only slightly mitigated by the idea that a re-release like the criminally underrated Sleeping Dogs will finally find it’s audience on PS4/Xbox One.  If you believe Square Enix’s claim that their 2013 reboot of Tomb Raider was a money-loser for the company (I do not), maybe you could find it in your heart to support this little indie studio by purchasing the Tomb Raider “Definitive Edition”.

Failure to Launch, aka Fix Your Shit: It was a banner year for rushing half-completed games out the door, a cardinal sin almost every major publisher is guilty of in 2014.  Assassin’s Creed Unity, the latest game in Ubisoft’s biggest franchise sputtered upon release.  The game was a technical mess, a bug-ridden fiasco with a dodgy framerate.  This was likely a result of the annual release schedule Ubi insisted on following in order to maximize profits on their face-stabbing simulator.

The treachery of the Templars will not….AAAGGH WTF happened to my face!

Microsoft surely has the goose that lays the golden egg in the Halo franchise.  With The Master Chief Collection, they promised the ultimate experience for Halo fans.  What the game delivered was a cold, wet, fart of an experience with problematic multiplayer, a feature that the venerated series is normally known for.  Sony’s long-awaited social racer Driveclub stalled out at the starting line in October, plagued by server issues, completely shutting down online play.  For a racing game that could only differentiate itself from its competition by hyping its multiplayer components, this is a real problem. It was several weeks before servers stabilized, and a long-promised Playstation Plus edition has yet to materialize; fucking woeful.  If we have learned anything from this year, never take what the publishers are telling you at face value, and never ever pre-order, kids.  Pre-orders are for SUCKERS.

Overpromise and Underdeliver: To say that games released in 2014 did not measure up to their hype is to put it mildly.  Due to the ever-spiraling costs of video game development, studios are relying on the “long con”, hoping that marks will continue to shell out money for DLC, maps, missions, and additional content in the months and years following release.  Unfortunately, as post-launch sales become a bigger focus, the game that is actually released often ends up a crushing disappointment.  No other game was as guilty of this as Destiny.  From Bungie, the studio behind Halo, one of the most successful video game franchises of all time, and the beneficiary of a staggering 500 million dollar budget, this game was a shoo-in for game of the year accolades.  Unfortunately, gamers quickly ran out of things to do, and the promise of a massive open-world Halo evaporated before our eyes.

Destiny wasn’t the only game to disappoint this year.  The hotly anticipated shooter Titanfall, from several key developers involved with the Call of Duty franchise was released early in 2014, only to lose player interest in short order.  Watch_Dogs, Ubisoft’s open-world hacking game generated a huge buzz when it premiered at E3 way back in 2012.  By the time the game made it to market this year, it looked less like the groundbreaking next-gen breakout that was promised, and more like a poor man’s Assassin’s Creed.  Note to Ubi: pressing square button is not hacking. Annualized sports games making their next-gen debuts like NHL15 and WWE2K15 (I realize I’m stretching the term “sports”, here) also left fans cold, as several last-gen features were stripped out of the game.

#GamerGate, a real shitty “movement” for people with small dicks: Out of the depths of their mom’s basement, came the #GamerGate “movement”.  Unhappy with the politicization of video games, and demanding journalistic integrity from the video game blogs they read, this group of mouth-breathing neckbeards set out to make a point this year.  And that point is that children (and slow-witted adults) have enough time to start Twitter and email campaigns to demand fairness in reporting, about video games.  Treating some poor kid who is making minimum wage reviewing the latest Mario game for an outlet like Kotaku like he is Woodward and/or Bernstein is bad enough, but these trolls spent an awful lot of time harassing developers and prospective game-makers online as well.  One frequent target, game and culture critic Anita Sarkeesian was threatened with physical violence enough times that a planned talk on women in games at Utah State University was cancelled.  Problematic people like the GamerGaters reflect poorly on us all, you cannot debate that video games do not make us violent people in one moment, and threaten rape and murder the next.  In addition to the damage done to the reputation of video game enthusiasts, they may have also cost us several great games in the future, as people looking to live their dreams getting into the field of game design see the personal attacks from “fans” as just too steep a price to pay.

Hack Attacks: To top off this tremendous year we’ve been having, a pack of juvenile delinquents issued a DDOS attack against PSN and Xbox Live gaming networks on Christmas day, rending gamers’ new $400+ presents useless for online play.  A quick note to mainstream media, this is not a “hack”.  A DDOS attack is a flood of fake traffic, generated by some turd with a script he found on the internet, and as such, requires no skill.  To use an analogy, a hack is like breaking into a bank’s vault after hours, and making off with millions.  A DDOS attack is like walking into the lobby of the bank with about 200 of your closest friends, and spraying the floors and chairs in the lobby with diarrhea until nobody wants to go in the bank, ever again…

No list of the year in games would be complete without my personal choice for the worst game of 2014, so I present to you my selection for 2014‘s Golden Turd Award for lack of achievement in video games: Duck Dynasty

The Robertson family of Duck Dynasty has displayed no small amount of craft and guile in getting their likenesses slapped on shit. Things like t-shirts, pillowcases, bobbleheads, View Master Slides, Pez dispensers, enema bags, toilet paper holders, and all other manner of consumer bullshit.  Most of it ends up in a WalMart dumpster, which coincidentally enough, is where most Duck Dynasty fans do their shopping.  So it should come as no surprise that Activision tapped developer FUN Labs to shit out this shovelware abomination featuring America’s favorite homophobes onto store shelves for the holidays, before Obama and all the other dirty liberals declare war on Christmas.

Duck Dynasty is the game for you! Unless you’re a liberal, or a sodomite!

The game consists of a whole lot of duck shootin’, truck drivin’, sister fingerin’, and other leisure pursuits of the south.  Each individual activity plays out in a minigame that is less fun to play than the one that proceeded it, like some kind of white trash Mario Party.  It is a terrible game that should not exist, I’ma tell ya whut.  Does somebody on that show say that?  I hope they do, that’s just a guess.  Unfortunately, picking up this game for PS4 or Xbox one results in beards that are no better rendered than on the PS3 or 360, and the nightmarish hell beasts known as the Robertson clan look like they would be more at home on the PS2, in a Castlevania game.

I am well aware that this year in review has come off as largely negative.  It’s easy to criticize.  It is also quite a bit of fun.  However, not all hope is lost, and there were a couple of bright spots in an otherwise lackluster year.  Nintendo finally started making their case for you to buy a Wii U.  Their lineup was strong this year, with Super Smash Bros, Mario Kart 8, and game of the year contender Bayonetta 2 being released exclusively on Nintendo’s long-forsaken hardware.  I have it on good authority that “Captain Toad beats the tits off any game anybody else got.”  Who told me this?  Why, it was Nintendo of America president Reggie Fils-Aime himself.  Lord of the Rings spinoff Shadow of Mordor was better than any licensed game has any right to be, using the fantastic combat system from the Batman Arkham series, while introducing the “nemesis system”, making enemies who kill you stronger the next time you fight them.  Another standout game this year was Far Cry 4, which performed the amazing feat of making me want to play more Far Cry.  After dumping hours upon hours into the last game, I thought I was done.  What can I say; I have a soft spot for this series.  And the fact that you can ride into an enemy camp on an elephant firing a machine gun at bad guys, using the pachyderm’s strength to ram pickup trucks off the mountain hideaway, well, I’m not made of stone. Gameplay like that can melt even the coldest of hearts.  See you in 2015, suckers!