Latest Update 9-2-14: The Feds are finally catching up to the Lizard Squad shown in the tweet below. It seems that other “White Hat” hacker groups have also exposed the Lizard Squad publicly on the interwebs. Doxxed bitches, GG!

Update 8-26-14: The DDoS attacks on U.S. gaming networks continue.  Originally Lizard Squad claimed responsibility, but recent reports point to a member of Anonymous. FamedGod, who now claims responsibility for the attacks is a member of the Anonymous Group, who were responsible for the famous “2011 PSN Outage”. As proof he revealed the IP addresses of the Lizard’s publicly. He tweeted out “Why must someone take credit of ones work? LizardSquad couldnt hurt a fly. Decrypting a memory dump and finding the server was all my work.” FamedGod then spouted out the usual garbage about why he went after Sony. That is all well and good, but everyone is being DDoS’ed, Sony, Blizzard, League of Legends and now “they”, whomever they are, have brought Twitch to it’s knees.

There are so many reports as to why these DDoS attacks are happening, and who is responsible. So far every reason seems bogus, what would taking out America’s gaming do to “stop the bombing of ISIL” or teach Sony to higher better internet security. OK, so you like teaching big corporations a lesson in manners. Is Sony running guns? Does Blizzard have weapons of mass destruction? Is Twitch trafficking children? Does LoL run a drug trade? Why don’t these “hackers” go after someone that deserves it…  Stop wasting your time depriving us of playing video games. Also, a real reason for all of this, if there is one, would be nice.

Original Article 8-24-14:
Today gaming servers for,  Blizzard, Playstation Network, League of Legends and more are under DDoS attack, The group of Hackers claiming responsibility call themselves Lizard Squad. In a tweet following the attacks Lizard Squad states that “Sony, yet another large company, but they aren’t spending the waves of cash they obtain on their customers’ PSN service. End the greed.”

The attacks started earlier this morning with Blizzard’s servers which run games like Hearthstone, Diablo 3 and WoW on battle.net. Then the DDoS attacks quickly spread to League of Legends and Path of Exile before they decided to focus on PSN. This attack is currently ongoing, and the victims are working hard to get their servers in order. It also seems that Lizard Squad claim to be terrorists seen in tweets below. 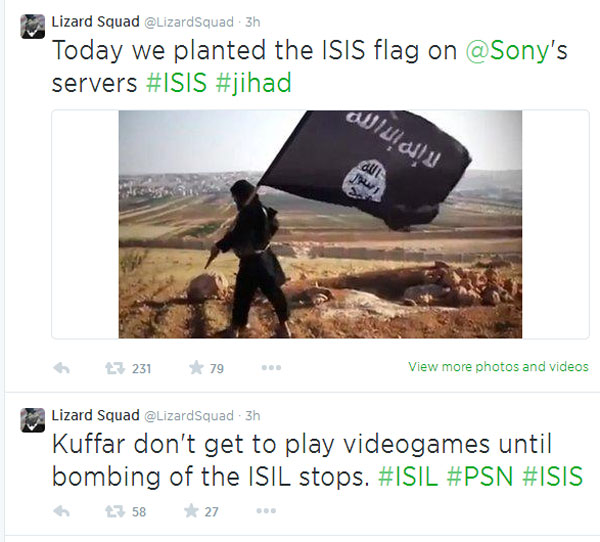 I’m willing to bet these guys aren’t terrorists. The Lizard squad is probably some Otaku Neckbeard in his mom’s basement who got an account or two banned for gold farming or botting. So, now he is throwing a DDoS tantrum.