Home › Reviews › Grand Theft Auto V – The Good, The Bad, and The Ugly

Grand Theft Auto V – The Good, The Bad, and The Ugly 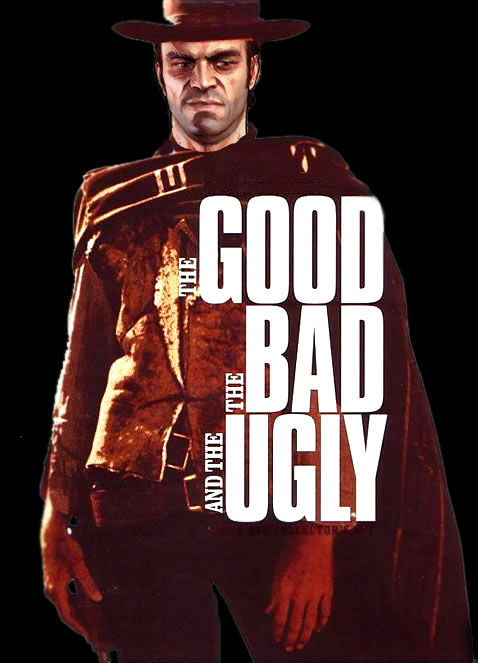 Well, here we are, nearly two months removed from the release of Grand Theft Auto V, ostensibly the last “must-have”, triple-A multi-platform launch of the PS3/Xbox360 generation. The game earned a billion dollars in its first three days of release, which equals roughly a metric shit ton of copies sold. I am not good at the maths. Although I am hurt that so many of you would purchase the game before receiving my ringing endorsement, I understand completely. A GTA release is an event in every sense of the word. This begs the question: does the game meet the expectation created by months of crushing media hype and the five and a half year hiatus since GTA IV released? The answer: Yes. Sort of.

Here’s a big surprise. Rockstar, renowned for creating the most well written, story-driven single player game experiences for the last 15 years, has hit another huge home run here. GTA V clings to the tried and true Rockstar formula: 25% crime drama, 25% cautionary tale, 25% trenchant social commentary on our wealth-obsessed society, and 25% dick jokes. The stakes are upped considerably in a couple major ways, however, and that is in scope and immersion. The city of Los Santos, a funhouse mirror reflection of the greater Los Angeles area, includes huge sections based on real life locations in Santa Monica, Hollywood, Beverly Hills, and South Central LA. Highways stretch out into rural Blaine county, allowing you to visit the inland empire dirt people that make up the trailer parks and meth labs of this arid desert locale. Everywhere you go, you see the painstaking attention to detail that is the hallmark of Rockstar’s world-building mastery. From the clothes the NPCs wear, to the cars they drive, to their ambient dialogue, you will know whether you are deep in the hood or the heights of high society.

The Grand Theft Auto series has always come under fire for its cast of sociopathic miscreants. I certainly never would have expected a game based on stealing cars, selling drugs, and other criminal acts to feature so many ne’er-do-wells. But here we are. This time, we have three protagonists, each with their own storyline, supporting characters, and side missions. And even though none of them can be seen as particularly likable, I found their personalities and motivations to be well thought out. Michael is the retired bank robber, a dinosaur out of time, who chafes at inactivity and the demands of his excruciating family. He becomes the mentor of Franklin, a car repossessor involved in endeavors of indeterminate legality, desperately trying to rise from his station. They make a great partnership, until Trevor, an old business associate of Michael’s, re-enters his life with all the subtlety of a tornado through a trailer park. He is a man of industry (that industry is methamphetamine) with a volatile temper and no socially redeeming qualities whatsoever. Roughly 80% of the game’s laughs originate with him. 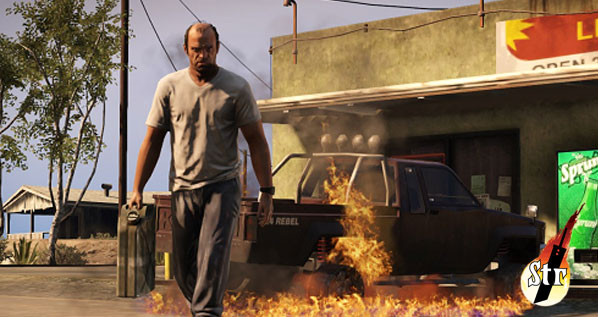 GTA V delivers a lot of the same rock solid gameplay from earlier iterations in the series, with a few notable additions. Firstly, you can switch between the three protagonists almost at will, which will keep you from getting bored or burning out on any one of the characters. Several levels are preparation-heavy heists, which will require you to hire one or more flunkies, park a getaway car nearby, then plan and execute one of a couple different strategies to complete the job and maximize the score. These levels are where the game really stands out. There is also a crazy metagame revolving around the stock exchange. It adds dimension to the proceedings, clearly illustrating a massive world where your actions have consequence and weight. For example, you could be tasked with wiping out a popular and astute CEO of an over-performing business. Invest in his competitor, waste the billionaire bastard, and watch the money come rolling in. One random side mission had me playing Trevor in the role of good samaritan, chasing down a bike thief for a victim on the sidewalk. I returned his bike to him coated in the thief’s blood, after pulling it out from underneath my SUV, and I was rewarded with an email several weeks (in game time) later, letting me know that the grateful cyclist had started his own organic pet food business, and hey, here’s some free shares in his company.

In all, the single player experience was some of the most pure fun I’ve had during this generation. Arguably, it’s the high point of the Grand Theft Auto series. The visuals are amazing, the writing and voice acting are absolutely top notch, and everything about the game has such a high level of polish, it feels like an achievement that will be really difficult to top.

Oh boy. I was really excited for this. A few weeks after the game launched, GTA Online was patched in, allowing the player to switch from single player to an open-world online mode. Due to the phenomenal sales success of GTA V, a rocky launch to online was almost assured. What we got was a little beyond that. For the first week, there were bugs, load time issues, and crashes. I am not an IT guy, but I could only imagine a server farm somewhere, burning to the ground as angry GTA fans readied the most tersely worded emails they could muster.

And how do I know GTA fans are angry? I’ve been playing online with them the last few weeks. I don’t mean to generalize, but I’ve met Oakland Raider fans who were more affable. The game at least works now, so what’s the deal? For one, the character creation is one of the most bizarre exercises I’ve seen in a game. Diametrically opposed to the Saints Row series, in which you can build a character to look like literally anyone you can imagine, GTA V gives you exactly four options. Pick your maternal grandparents, your paternal grandparents, and spin the wheel, as genetics dictates what your online avatar will look like. Fair enough, but what about the gameplay? We were promised an open world where we would be able to participate in jobs with our friends, and enjoy the sandbox activities offered by the single player game. What we got was the ability to rob a liquor store with a total stranger, just before getting shotgunned to death by another stranger waiting outside the store. This misanthrope enjoys waiting outside anywhere money changes hands, just indiscriminately gunning down other players. Now you’re online. Fun, eh? 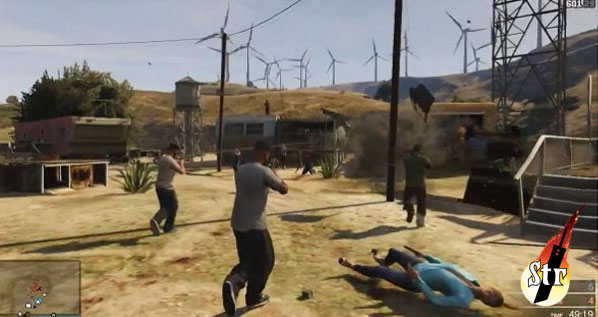 The menus and options are confusing as hell. I’m told I can jump into a menu which will put me into a job playlist, allowing me to rotate in and out of several different jobs with a number of online players. This playlist also includes team deathmatch, races, and several other activities which are quite clearly not jobs. The sandbox mode is not much more fun. After avoiding a serial griefer and stealing his car, I was notified at the chop shop that I wouldn’t be able to modify it, because it belonged to someone else. For a game called Grand Theft Auto, I found this to be perplexing and amusing. Have you ever been discouraged from assassinating someone while playing an Assassin’s Creed game? Hell no you haven’t, because that would be stupid. Many of the activities are made more annoying by the inclusion of voice commands. It might sound like fun to scream at a clerk into the bluetooth headset to make him empty the register faster, but it’s no fun for the rest of us. In all, online is a lot like the single player. But instead of the well thought out pace and structure of the story mode, you get a bunch of twelve year olds calling you a homosexual. Life is all about these trade-offs, I’ve found.

The iFruit app was released to the iTunes app store shortly after GTA V was released. The irony of releasing an iPhone parody only on iTunes was not lost on me. As a companion app to the game, it contained great promise. You could tune up and trick out your in game whips with the app’s vehicle customizer, and teach tricks to Chop, Franklin’s pit bull, by using a Tamagotchi style virtual pet program. Tie it to your Rockstar Social Club account, and customizations in the app make their way into your console game, in theory.

The problem was, the app was buggy as all hell at launch. And if you, like me, believe Apple to be in league with Satan, you’d have to wait several weeks for the Android version to come out. Having messed around with this virtual time waster in its most bug free form, I can safely assure you. This app is horse shit. As expected, all of the “good” custom license plates were already taken. Did you want all of Los Santos to know you are a TITLOVR? Too bad. Taken. For some reason, the game will put your personalized plates on all three protagonists’ vehicles. Given the difference in personality between these characters, that is a little jarring. And the less said about the “Chop” trainer, the better. But I’ll say a few things anyways. You pick up his poop, feed him, and make sure he has water. Fascinating stuff. This was OK in the mid 1990’s, when you had a digital Tamagotchi in your pocket. And you were seven. 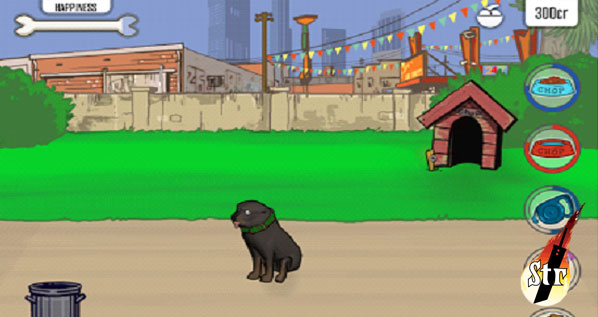 Please, put this dog to sleep.

There is another mini game involving Chop chasing other dogs off, trying to keep them from humping his girlfriend. It is as charmlessly crass as it sounds, and about as engaging as one of those “punch the monkey” banner ads circa 1998. I have not interacted with my virtual Chop in weeks. He is likely starving and thirsty, living in a pile of his own feces.

I like that Rockstar takes chances. I really do. And that some of these side endeavors did not turn out the way I envisioned them is alright by me. For their part, they have created the most compelling chapter in one of the most revered video game series of all time. Play the single player, know that you are playing the best game of the year, and imagine what these guys will do with the PS4. And look at it this way. GTA Online and the iFruit app are totally free. They are priced appropriately, in my estimation.