Is there more fertile ground for a video game than the big budget Hollywood action movie?  Broforce is not just a fond tribute to the amazingly cornball 80’s action aesthetic made popular in the oeuvre of Schwarzenegger and Stallone, but it looks and plays like a videogame from that beloved era as well.  Broforce is 100% pure nostalgia, from the characters of trashy 80’s cinema to the influence of NES and arcade classics like Contra, Metal Slug, and Bionic Commando. 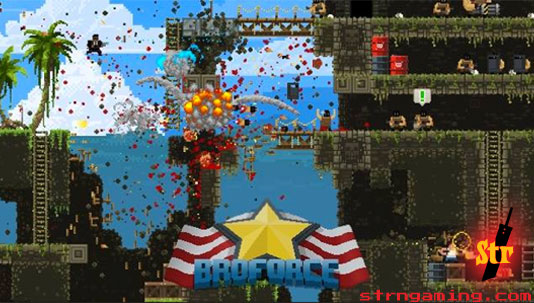 There used to be some bad guys in there.

Broforce is the creation of South African indie studio Free Lives Games.  Players control one of many different “Bros”, basically caricatures of the hyper-masculine alpha males we were so fond of back in the 80’s. Remember paying $3 to rent a VHS tape of Dolph Lundgren blowing up dirty communists for an hour and a half?  Free Lives Games remembers, and the characters they have inserted into this game are all loving parodies of these larger than life action stars.  They all have “bro” in their name, ie Rambro, BA Broracus, and Robrocop.  The gameplay is as dirt simple as some of the greatest NES/Sega Genesis games of yesteryear.  Run around a mountain fortress, shoot bad guys, rescue hostages, and blow up red barrels.  Then kill Satan and jump on a helicopter which will give you a lift to the next stronghold to do it all over again.  It is a tale older than time.

The environments within these terrorist bases are almost entirely destructible.  Don’t want to climb up that ladder to shoot the bad guy in the face?  Shoot the ground underneath him, and he will fall to a grisly 8-bit death.  Some barrels will launch through walls and ceilings, taking out squads of terrorists before exploding.  The violence is hilariously gratuitous, but it is somehow rendered adorable by the retro pixel art style. 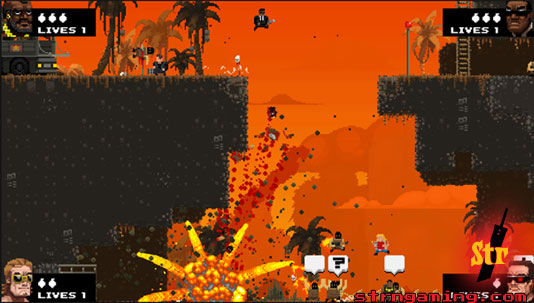 The Bros take care of business.

Free Lives Games, you guys get me.  I don’t think I’ve ever played a game, indie or otherwise, that spoke so clearly and directly to me.  I love old school games, and I have seen every 80’s action movie you know of.  And several more that you haven’t.  This experience is everything that a video game should be, which is to say, a hell of a lot of fun.  And its pixelated, ass kicking stars made me long for a movie that could cram all these awesome bros of the past into one karate-kicking, terrorist-shooting, tank-exploding action flick.  Can you imagine, in their prime?  Who could settle for the flabby Stallone and man-boobed Schwarzenegger we got in Expendables 2, when we could have Rambro and Commandbro?  The “I’m here for the paycheck” Bruce Willis of Cop Out instead of Bro Hard? I can tell you for damn sure I’d rather see the further adventures of Indiana Brones than that Crystal Skull, or Harrison Ford and the Golden Depends or whatever the hell. 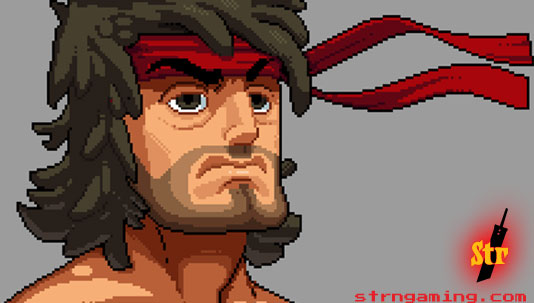 You can currently play the “brototype” for free at http://www.freelives.net/BROFORCE/BROFORCE_WEB.html. If you enjoy it, drop some money on a pre-order.  The good news is that the game has already been approved on Steam Greenlight, and should see a full release soon.  I highly recommend supporting these guys, I cannot wait to play the full version!  Yooo Bro!