With the popularity of indie games on the rise, gamers have more choice and variety available in what they play than ever before.  Small team, micro-dev projects are finding their way into the hands of more and more players, thanks largely to Steam’s project greenlight and crowdfunding sites like Kickstarter and Indiegogo.  Sony has received great kudos in the gaming press for their indie-friendly publishing model, while Microsoft’s indifference to smaller developers has earned them quite the opposite.  It can be said that Microsoft is adjusting their course to correct this, but they are most certainly playing catch-up to everyone else in this regard.  All that being said, I’d like to focus on some of the best of the indie bunch, and let you know which of these hidden gems are worth your time.

Which brings us to Octodad. 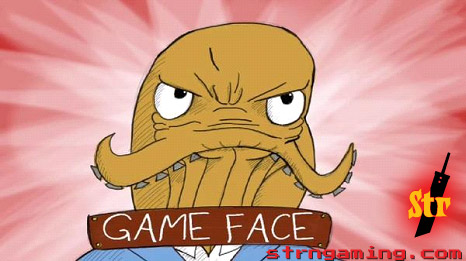 Your game face. Put it on.

This game actually began its life as a student project for 2011’s independent games festival.  It was developed by a group of students from DePaul University.  That’s pretty impressive.  When I went to college, I just drank a lot of beer and played pinball at the student union.  Know what I didn’t do, besides graduate?  Make a damned video game.  The team threw out several different concepts, settling on the idea of the player operating a human body, as if piloting a robot.  Eventually, this idea evolved into what you see in the final game, which is an octopus disguised as a human, doing everyday tasks.

The true appeal of Octodad is this simplicity.  The art style is very basic and amateurish, and the entire game can be completed in under an hour.  The challenge of the game is in its ridiculous control scheme.  Much like the flash-based browser game QWOP, the player is able to control Octodad’s legs independently of one another, guiding him into the various rooms in his house to perform his fatherly duties.  This results in the hilarious visual of Octodad stumbling from room to room clumsily carrying out chores, like a drunken Randy Travis staggering home from a Super Bowl party. 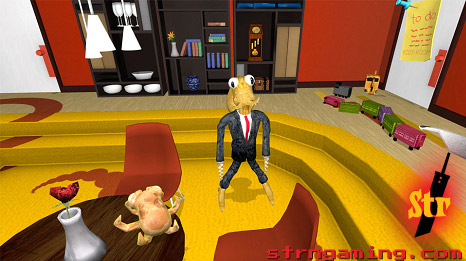 Nobody suspects a thing.

Octodad’s story is a little light, and a lot implausible.  He is an octopus disguised as a human.  Nobody is aware of his cephalopod nature.  He has a human wife and human children.  How he fooled a human woman into marrying him and giving birth to his children, that’s weird enough.  But wouldn’t his children be half octopus themselves?  I guess it’s best to not think about such things.  He performs household chores and plays with his children, and if the player is not in control enough to approximate human movement with his sucker-covered tentacles, people will grow suspicious of him.  Once the “suspicion meter” is full, his ruse becomes apparent to the humans, and the jig is up.  At some point, a sushi chef appears, threatening to expose Octodad, and worse, to chop him up and serve him with California Roll in his restaurant.  As I said, the story is nonsense, but the game’s oddball sense of humor continues to propel it forward.

If you download Octodad (and I heartily recommend it, it is free at www.octodadgame.com for PC and Mac), you might be interested in its full-featured sequel, Octodad: Dadliest Catch when it is available on PS4, PC, Mac, and Linux in early 2014.  In addition to having the funniest title at E3 2013, Octodad: Dadliest Catch also has the catchiest theme song. 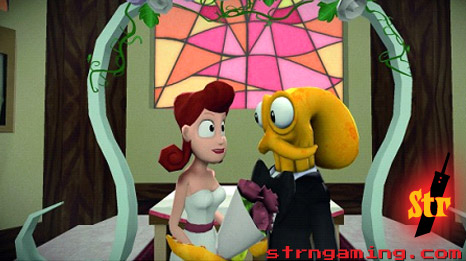 The game is being worked on by Young Horses, a newly formed developer made up largely of the student devs behind the first Octodad game.  I can’t wait to see what the team does on a platform like the PS4.  All of the charm and tomfoolery of the original appear to be present in the sequel, but the graphics look to have been given a major upgrade.  With the next generation of consoles just around the corner, we won’t have to wait long to find out if Young Horses can deliver even more invertebrate antics with the highly-anticipated (by weirdos like me, anyway) sequel.