Home › Exclusives › Saltybet.com – Convergence of all the Internet’s Insanity

Saltybet.com – Convergence of all the Internet’s Insanity

Guys and gals, the internet is a very scary place.  Far be it from me to make the declaration that there is nothing new to see here, but to be honest, I was getting pretty jaded.  In my travels around and about the world wide intertubes, I have exposed myself to insane levels of fandom from nearly every pool of popular culture;  video games, comics, role-playing games, bad movies, anime, 1980’s professional wrestling.  You name it, I’ve nerded out for it.  But after spending a couple evenings on www.saltybet.com, I think I can say: I have seen some shit now.

Saltybet.com is an amazing nexus that joins the fighting game scene with the excitement of Twitch.tv livestreams.  Mix in gambling with fake currency, every superhero/cartoon/fighting game character that ever existed, and a liberal dose of mental illness, and you have a recipe for the internet’s latest sensation. 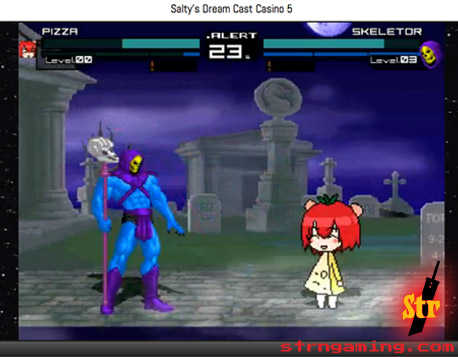 All this lunacy began with MUGEN, a kind of do-it-yourself fighting game engine which allowed several thousand like-minded nutters to build their own fighting games, including full rosters, sound clips, backgrounds, etc.  Not content to rip sprites from fighting mainstays like Capcom and SNK, many of these enterprising young lads went about creating and animating their own characters.  And by that, I mean infringing on every copyright on God’s green earth.  Do you want to know who would win in a no holds barred street fight between Ronald McDonald and Colonel Sanders?  Somebody did, because that shit exists; Peter Griffin vs. Homer Simpson?  It’s been done.

Here’s where Saltybet takes these last several years of mashed-up junk-culture silliness, and turns it into such compelling entertainment.  A live, continuous, 24/7 stream matches the combatants, and gives you about ten seconds to size them up, determine the likely victor, and bet your hard-earned “saltybucks” on it.  The odds and payouts are determined based on this betting action, and the CPU vs CPU fight takes place, live and in real time, right in front of your disbelieving face.  Be prepared, you will have to make some snap decisions based on hasty judgment.  If you are not prepared to make your best guess as to who would win in a fight, Marvin the Martian, or the Thing from the Fantastic Four, then maybe Saltybet.com is not for you. 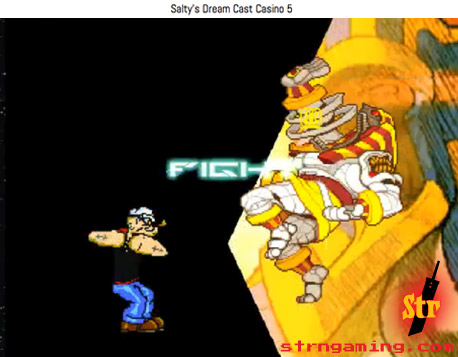 Popeye takes on Ankara, the freaky mummy from Capcom’s Darkstalkers.

Once you get your first taste of victory, the next round of betting begins.  And so it continues, on into the early morning hours, as you realize you’ve been watching Street Fighters take on superheroes for the better part of several hours, and you’d like to stop, but look who’s fighting next!  Of course Godzilla would beat Buttercup from the Powerpuff Girls, what are you, stupid?!  Oh no, my moneyyyyyyyy!!!

Because this action is all streamed live through Twitch.tv, you can live chat with other saltybettors.  The chat stream rolls through the right side of the screen rapidly and furiously.  Since most of these crazy people speak in the jargon of the competitive fighting game scene, you may need a translator.  Having spent time among them, studying their ways and customs, I have provided a glossary of some commonly heard terms:

Salty – someone who is “salty” is angry over a loss; it refers to the salt in one’s tears.

Real – a close match that is exciting to watch, “Blanka vs. The Beast?  Real match.” “Oh, yeah, the realest.”

I’ve made a huge mistake – a quote from Arrested Development, usually seen after the odds post, and a bettor realizes that their choice is a massive underdog.  This is also frequently seen whenever a Dragonball Z character is chosen, never a good move.

ASCII art penis – there is no hidden meaning here, this is exactly what it sounds like.  Occasionally, ASCII art will fly by in the chat.  It will frequently resemble a penis.  Hooray for the internet! 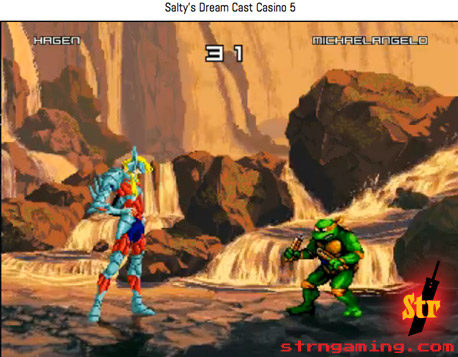 Michaelangelo takes on Hagen…who the hell is Hagen?

If you have not already bailed on this article to do so, you owe it to yourself to head on down to www.saltybet.com to see what all the noise is about.  Sometimes you just have to know if Spider-Man would be able to take down Simba from the Lion King.  Sure, Dhalsim is tough, but could he take Commissioner Gordon down if he had to?  Place your bets!