Binary Domain is a very easy game to recommend. Do you like Gears of War style cover-based shooters? Do you never tire of shooting at robots? Are you a fan of storytelling that is next-level insane? If you answered yes to at least two of those, I find it even easier to recommend this game to you; shine on, you crazy diamond.

Here is the story. In the far-flung year 2080, robots walk among us, both in the traditional domestic worker roles foreseen by “The Jetsons” and disguised as humans -metal robotic skeletons covered with human flesh, like the Terminator, but with less ridiculous accents. These “robots in disguise” are called “Hollow Children”, and the gag is that most of them do not even realize that they are robots, until their faces get blown off, and they come to the realization that they are not the shoe salesman, executive assistant, or housewife they believed themselves to be. 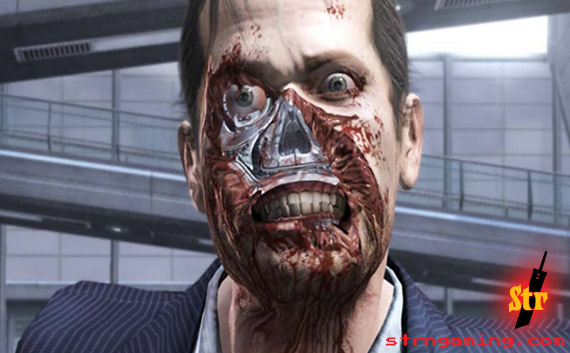 That is never going to heal if you don’t stop picking at it.

I imagine that one of these Hollow Children must have had a check-up with their doctor at some point, the doctor would have delivered the devastating prognosis that “Hey, you are a goddamned robot”, and that would be that. This never happens. You see, Hollow Children are illegal, as creating a robot that can pass for a human is against “The New Geneva Convention”. This was created because the old Geneva Convention was some played-out horse-crap. Anyways, the International Robotics Technology Association (IRTA), a sort of United Nations for the world’s robot problems, dispatches these Hollow Children by sending out “Rust Crews”, hit squads made up of highly trained soldiers whose only job is to remove these robots from society by shooting them in the face. This is a job description that can only exist in video games, or in stories written by twelve year olds.

If it sounds like I am spending an inordinate amount of time describing the back story, I apologize, but if Binary Domain’s gameplay was the focus of this article, it would only be about five words long. YOU SHOOT ROBOTS A LOT. That’s pretty much it. Shoot robots, then shoot some more. Shoot them hanging off a car, jumping off a building, dangling from a monorail train. Shoot little flying robots, giant spider robots, and inexplicably, a robot gorilla. It’s as if Fatz Geronimo from the Rockafire Explosion ripped off his gorilla skin, and his robotic endoskeleton went mad attacking children and their parents at the local Showbiz Pizza. That reference is for the 5 or 6 of you that remember what Showbiz Pizza was. So yes, that’s the gameplay. Shoot every moving robot in sight, while occasionally hiding behind cover.

Here is where the story is a little nuts, and is, in reality, the only thing that makes this game even kind of memorable. You play as Dan Marshall, leader of the Rust Crew tasked with infiltrating Amada Corporation, a shadowy Japanese outfit that has been creating Hollow Children because: hey, video games. The team is multi-national, which is to say that not many national or racial stereotypes are spared. There’s Big Bo, a massive black man carrying a heavy machine gun. He looks like Roadblock from GI Joe, if he just had the plot of the movie Soul Man spoiled for him. 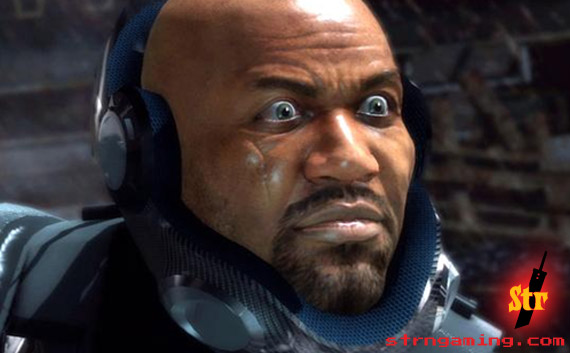 Then there are, uptight Chinese sniper Faye, a couple of by-the-book Brits, and a French robot round out the cast. How do we know he is French? Not because he is cowardly, although admittedly that would be funnier. He speaks like Maurice Chevalier, constantly warning the heroes about “zee Hollow Children”. He may have been wearing a beret, but that may be just me mis-remembering the game. If you are the kind of person that doesn’t want a mediocre game from a year and a half ago spoiled for you, you might want to bail out of this review now.

At some point in the game it is suggested that ANYONE could be a hollow child, and you would have to be brain-injured if you do not see the plot twist coming. Someone on the crew is themselves a robot, and just doesn’t know it yet. Oh, I should mention at this point of the game, Dan and Faye have had sexy relations. Yeah, it’s Faye. Faye is a robot, half robot, actually. And here is the point where the term “robot” kind of starts to lose all meaning. Her mother was a Hollow Child, who was engineered to be able to carry and deliver a child. Her dad was probably just some horny guy who presumably just went from port to port screwing robots. 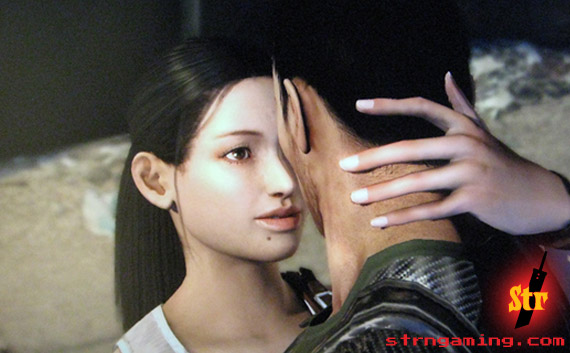 An example of the hot “man on robot” action contained in Binary Domain.

I will be spending the rest of the review talking about the concept of the future’s sex robots, so if you’re the kind of person that doesn’t like to hear about human-robot coitus, you might want to bail out of this review now. Callback! Anyways, Dan disobeys orders to terminate Faye, and after a final tedious boss fight, Faye is allowed to run away. After a post-credits cutscene, it is shown that Dan, having fallen in love, has tracked her down, and accompanies her on her journey, evading rust crews who will be hunting them down for the remainder of their days. It is presumed that he is wanted for dereliction of duty, treason, and robot fucking.

I find the story of Binary Domain to be as compelling as some of the best science fiction out there. Like the works of Isaac Asimov and Philip K. Dick, it asks difficult questions about our identity. Who are we? What is it that makes us human? And what would happen if you humped a robot, and got it pregnant?

3 comments on “Stupid Console Games You Should Play: Binary Domain”