But this is a big budget, A-list game, you say!  The highest-selling entry in a series that has moved over 50 million units, you say!  I do not care.  This game is at once terrible and a work of great genius, in the spirit of the best/worst drive-in sci-fi/horror flicks ever made.  RE fans, I hope you are wearing helmets when I say this, because I don’t want to ruin your monitors when I blow your mind: THE RESIDENT EVIL SERIES IS NOT VERY GOOD, AT ALL!  In this chapter, series mainstay Chris Redfield and his temporary co-op partner What’s-her-Name are dropped into the hot zone of Kijuju, Africa, totally not a made up name.  They are there to deal with a zombie outbreak, excuse me, a Majini outbreak, not a zombie outbreak.  What is a Majini?  It’s kind of like a zombie.  Except Majini can do things like wield chainsaws, shoot at you with sniper rifles, and ride on motorcycles.  And zombies can do none of those things because, what are you, a goddamned idiot? 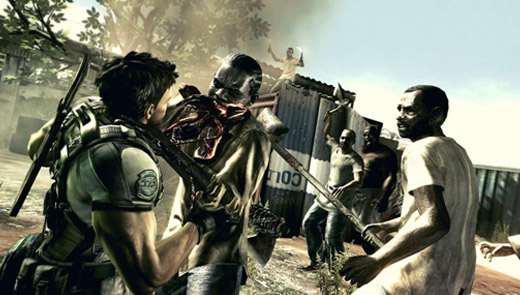 “Say, does this look infected to you?”

All this African malfeasance is the work of returning antagonist Albert Wesker, who is infected with a strain of the “progenitor virus”.  This allows him to have super powers, not the least of which is making a long black trench coat and sunglasses look stylish, despite the fact that The Matrix movies had fallen out of favor some six years earlier. 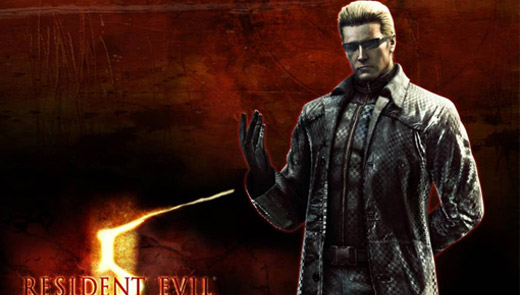 The controls in Resident Evil 5 are very similar to those in the earlier RE games, which is to say that they are complete dog-shit.  The characters move slower than the coming of Christ, and concepts like turning your character around and aiming, things that have been pretty well nailed down for the last couple generations’ worth of console games are a colossal pain.  It all seems calculated, hampering the controls in order to artificially heighten the tension when you are being chased by a zom…er, Majini.  This game got a really bad rap for being perceived as racist against blacks when it was initially released.  I don’t know about all that.  I was chased by an enemy who threw a spear at me, if that makes a difference.  I don’t know.  To be fair, the game does take place in Africa.  It makes a certain amount of sense that the “Majini” in the game would be predominantly black.  I only know one person from Africa, and you know what, she’s black.  Maybe by assuming that because she is black, most all people in Africa are black, maybe that makes me a racist.  I doubt it, though. 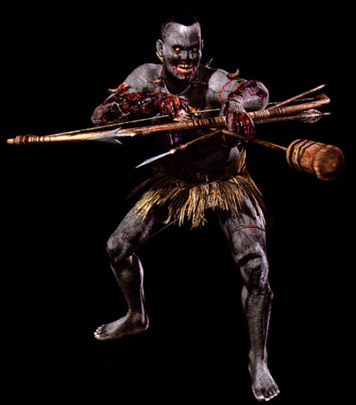 So why should you play this game?  The story line is so batshit insane, and the dialogue is so deliciously bad.  For a series known for its impenetrable dialogue (“You, the master of unlocking things”), this entry really takes the taco.  Some lines sound like they were run through Google translate, then back through Bing translate, then read aloud by someone on the Autism spectrum.

Given that the budgets of modern console games are so astronomically high, and each game green-lit carries with it an extraordinary financial risk, I expect that finding experiences like these will only become more difficult in the future, because it does not pay to make bad games, right games industry?  Right?!  Why doesn’t anyone answer me?!  Where am I?  What’s going on?!?