If you’re a gamer and have never heard of Portal, you should surrender your gamer card now and dismantle your gaming rig. Ok, I’m only, kidding….kinda. Sincerely though, if you’ve never played Portal, you’ve deprived yourself from experiencing one of the most unique, funny and innovative games this decade.

Game development is complex these days. We’re in an age when first person shooters are a dime a dozen, and it’s no secret a game needs to deliver a unique experience to avoid the risk of prematurely ending up in the bargain bin at Walmart. Valve Software is well aware of this and is no stranger to pushing gaming innovation. After all, they introduced us with the Half-life 2 gravity gun and a world with advanced physics to play around in, but it didn’t end there.

In October 2007, Valve released the much-anticipated Orange Box containing the next chapter to the epic Half Life 2 story. To this day, it remains to be the best compilation package to hit retail stores. The Orange Box featured five complete games: Half-Life 2, Episode One, Episode Two, Team Fortress 2 and Portal. Initially, it was hard to notice Portal, as it was tucked neatly alongside a complete breakfast of games. In time, gamers would realize that this little gem would be pegged as a masterpiece and met with overwhelming popularity and critical success (and ultimately lead to a sequel)!

If you’ve ever played Narbacular Drop, you’ll instantly make the connection between the two games, as they both rely on the magic of portals. This is no coincidence or act of piracy. The story goes, that in 2005 students of the DigiPen Institute of Technology showcased Narbacular Drop to Valve. Valve, impressed at what they had developed, hired the team and gave them a budget to expand the concept. Thus, the spiritual successor to Narbacular Drop was born. 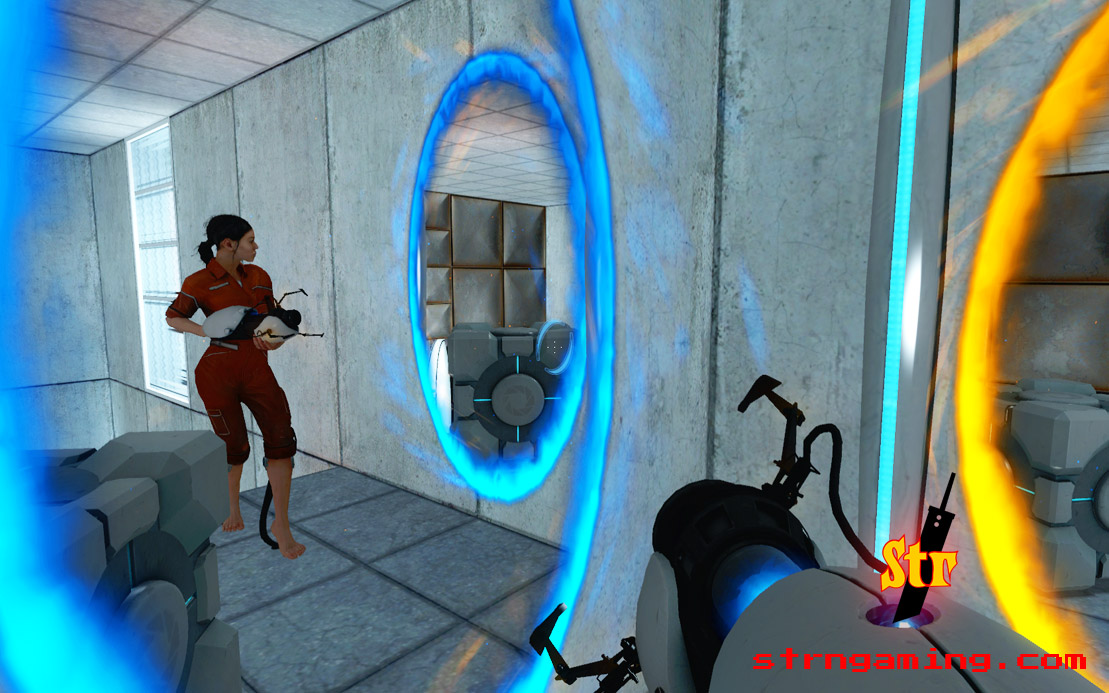 If you’re new to Portal, the premise is pretty straightforward and simple. You play the role of Chell, a woman who apparently is the perfect candidate for a research project sponsored by Aperture Science Laboratories. Each test is hosted and created by a computer with a female monotone erratic voice named GLaDOS. The purpose of these tests isn’t clearly addressed, but she does promise you cake upon completion of all of them! GLaDOS cannot be seen during the testing, only heard through the loud speakers. Doesn’t go without saying she isn’t watching your every move. What can possibly go wrong when a computer is running things, right?

Generally, each test chamber is all about getting from point A to point B, and the first couple tests are a piece of cake. After you progress through the initial test chambers, you’re ultimately equipped with an Aperture Science Handheld Portal Device (portal gun for short). This is where the game gets really interesting. This awesome device shoots a blue and orange portal doorway onto any flat surface that supports it. Walk into the blue portal and you’ll come out of the orange portal, or vice versa. Sounds simple enough right? Well, not quite. What before was a walk in the park will now test you’re problem solving skills and common sense. Acid pools, deep chasms, turrets, lasers and other obstacles of certain doom now stand in your way of completing each test chamber. Now armed with the portal gun, you’ll have an urge to give your high school physics teacher the finger as you have must unlearn traditional rules of gravity and physics. The concept of falling “upward” or “laterally” is now a possibility. With strategically placed portals, you can jump off a high ledge and use that free fall momentum to launch yourself across a room clearing any potential deadly threats. In GLaDOS’ words, “Speedy thing goes in, speedy thing comes out”. 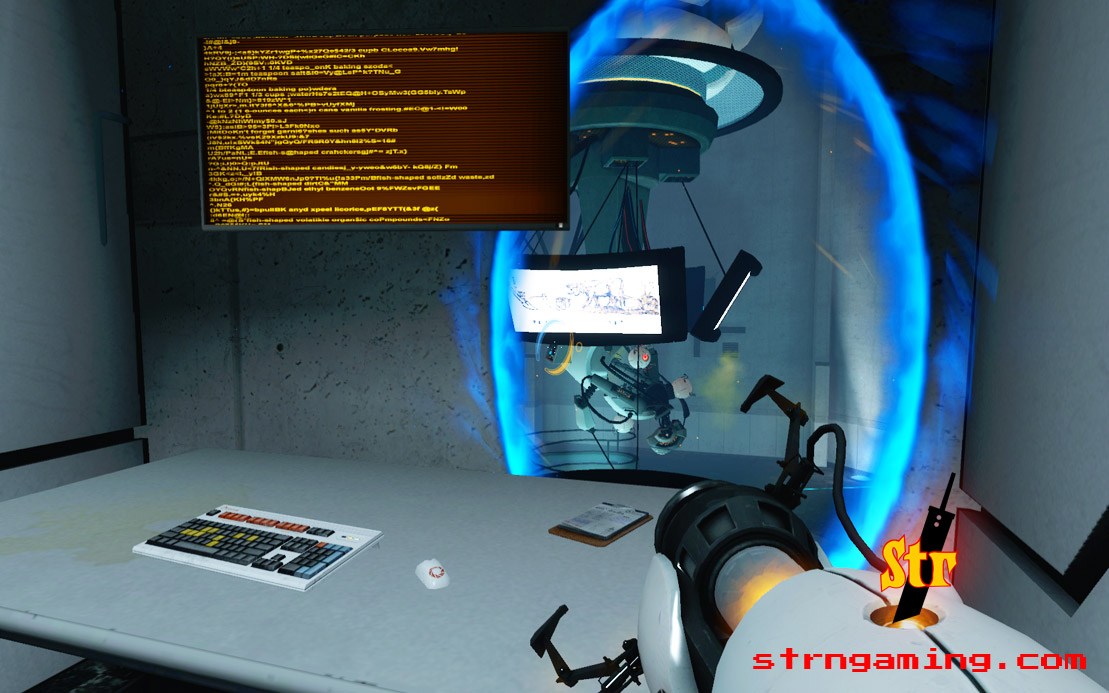 Upon completing each test chamber, you will realize that GLaDOS isn’t quite right in the head. She grows increasingly frustrated with each test you successfully complete. Her attitude will switch from mildly supportive to hilariously menacing. With that said, I think its best I stop here. Portal has a great story, but its better left unspoiled. Not because its terrible, but because Portal is a very short hilarious game with one huge surprise during the final 30 minutes. Upon completion, I clocked in about 3-5 hours. Its length is probably the games only flaw, but understandably necessary so the game doesn’t get repetitive.

I know what you’re all thinking. You now have a sudden urge to play Portal, but it came out roughly six years ago! Is it still any good? As we all know, games are known to age badly and are sometimes almost unplayable. So how does Portal fare compared to todays modern FPS games? To no surprise, it holds up extremely well. If you’re familiar with any game built on the Source Engine (Half-life 2, Left 4 dead, etc.), you pretty much know how its going to handle and look. Visually, Valve did an excellent job designing the look of the game. Personally, I’m convinced the game was designed to counter aging. Models are crisp, sharp and showcase great contrast with colors. The environments are aesthetically pleasing as well. Each test chamber is unique and never gets repetitive. 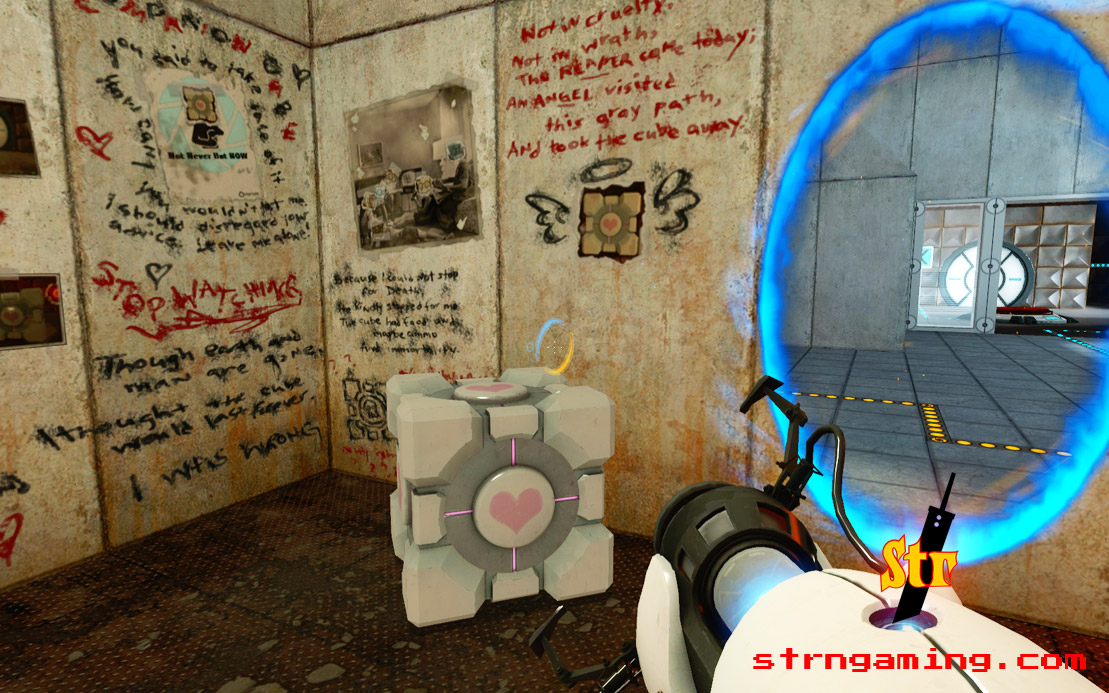 Where the game truly shines though is in the writing and voice acting. As you progress through the game, ominous scribbles left behind by former employee Doug Rattmann can be seen on walls that hint to reasons and events as to why Aperture Science Laboratories is so desolate. And kudos to the writing team for driving, you to establish an emotional bond with an inanimate object as well. I’m referring to the companion cube. The weighted companion cube’s sole purpose is to be used as a step to reach a higher ledge or a weight to hold something down. However, I kid you not, much like Tom Hanks’ bond with Wilson in Cast Away, you will constantly be mindful about its whereabouts and carry it with you before proceeding further to make sure no harm comes to it. Then finally, the star of the game GLaDOS steals the show. She boasts so much personality, it’s eerie and you absolutely cannot wait to hear what she has to say next. The last time I encountered an AI with that much personality and presence was SHODAN from System Shock 2. If you’re unfamiliar with what I’m referring to…think HAL-9000, but more sinister, witty and PMS-ing. To voice GLaDOS, Valve hired Ellen McLain, an American opera singer who was also hired before to do the announcer in Team Fortress 2 and the combine watch in Half-Life 2 (mind blown!). The delivery of GLaDOS’ monotone and dark sense of humor is spot on and will give you chills every time you hear it.

From start to finish, it’s hard not to enjoy Portal. It will have you scratching your brain from time to time as you are encouraged to think with portals. Portal is available as part of the Orange Box on PC, XBOX360 and the less polished but still awesome PS3 port. Steam also offers Portal as a stand-alone game retailing at around $10. Quick tip, every few months it goes on sale bundled with Portal 2 for roughly the same price. You can’t beat that. It’s a worthwhile play through, even if the promise of cake in the end may possibly be a lie. 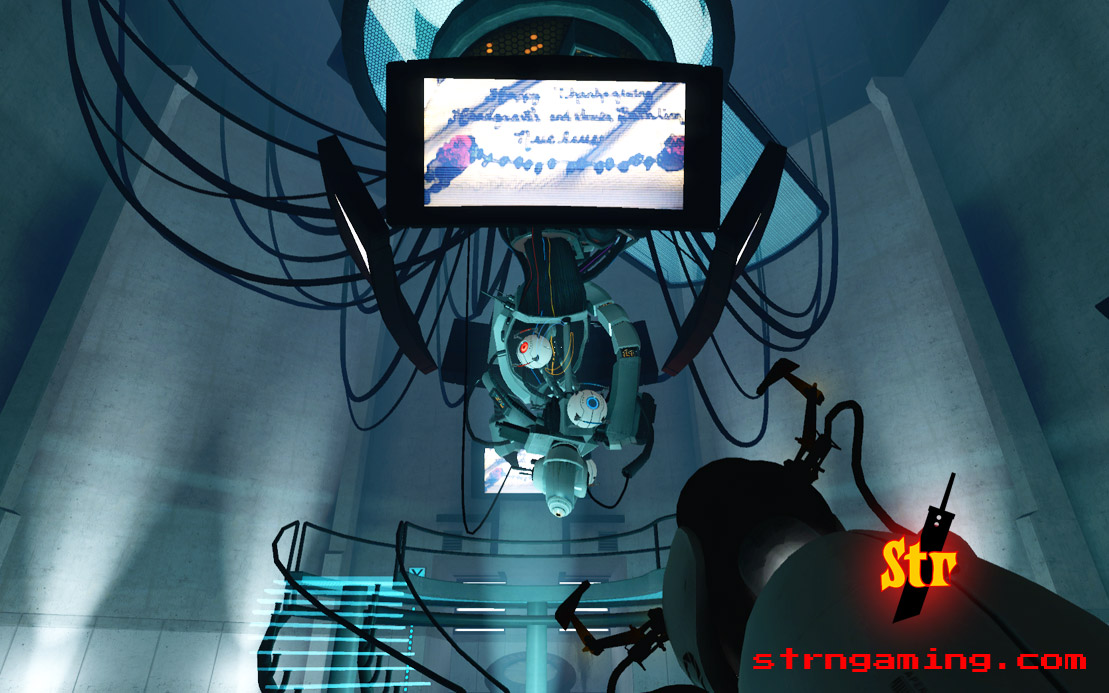