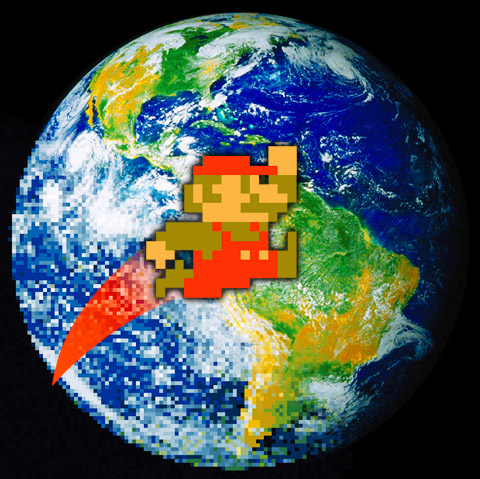 In a way, a very strange way, the old 8-bit video games are saving the world today. From getting paid to play games and using that money to help starving kids in Africa, to becoming an internet sensation and having your own TV show and movie, this is the story.

When I was 18 and moving out of my parents’ house I went through all my old video games and decided to take only my Xbox and Ps2 and throw all my old consoles and their games away. A decision I would later regret. You see, I grew up with a Sega Genesis and only had few cheap games that weren’t very good, not even any sonic games. I would later get a Nintendo when I was 14 with Super Mario Bros. and It was right around this time I realized that video games were something I didn’t understand anymore. There was just too many that I hadn’t played that it would take me forever to catch up. So with only of a few popular titles on my Xbox, Psx and Ps2 I took a long break from video games. Not surprisingly I would later pick up where I left off, my NES years later.

Around the time of 2007 I stumbled upon a few videos on YouTube that were funny, smart and said everything I wanted to about the old 8-bit games of past. They were posted by The Angry Nintendo Nerd, his handful of videos were getting popular at the time. Watching those videos stirred something inside me. It opened a door to an entirely new genre of YouTube videos. Slowly you started to see more and more of other people talking about their favorite or most hated old games.  Soon it wasn’t just games it was movies, TV shows and even commercials. A new wave comedians and reviewers had come.

Websites like ScrewAttack.com became popular review both old and new games and Nathan Barnatt’s Talking Classics. Suddenly I was taken aback by how much other people had such passion for all the things I did. Heading over to cinemassacre.com daily I would watch not just video game reviews, but old horror movie reviews, a genre I obsessed over going back to when I was a kid and rented every single Halloween, Friday the 13th and Nightmare on Elm Street. Soon I found The Nostalgic Critic and my days of free time were numbered.  So with a new perspective on how the internet could be way cooler I waited for the next step. I knew something good was coming, but I didn’t know what yet.

Somewhere on the other side of the gaming world PC gamers were streaming their gameplay online. Streaming was free at first and a good way to get bragging rights. In the early days of WOW, which was a game I never played and still haven’t, this trend was growing and heading to the next step – Getting paid to stream their gameplay. At first I thought this was pretty cool but then when I learned that a gamer Athene raised $1,000,000 for a charity using the streaming and reddit community I knew this was it. Playing video games into the wee hours of the morning drinking Mountain Dew was justified for some.  With other people jumping on the charity band wagon gamers are changing the world.

It’s strange how one video on YouTube connected me to all of the gaming community today and talk about the games of yesterday, inspired me to play new video games again and get thrown into a new world that is nothing at all like I had left it.

I am changed by it today. I no longer feel like an outcast when I talked about my favorite songs and levels and boss fights passionately anymore. Because now I know there’s more people like me out there. And let me tell ya, the world has changed because of it.  Because of us James Rolfe made a feature length movie based on the Angry Video Game Nerd videos that started my journey. Because of us Nathan Barnatt of talking Classics has 2 TV shows coming out. Because of us there are kids in Africa that aren’t going to bed hungry. Because of that I’m not ashamed to say, I’m Bobby Perez and I’m a gamer.