Ever since I was a young boy, I played the silver ball.  Well, that’s not entirely true.  When I was a young boy, I was busy playing coin-op arcade classics like Robocop, GunSmoke, and Rush’n Attack in the dirty game room at my local bowling alley.  Pinball was relegated to the smoky bar, where toothless rednecks violently shook them, as they did their small children, in between pitchers of Pabst Blue Ribbon.  It was an old people’s endeavor, pinball, and by the late 1980’s, it had a real image problem.  The 80’s started with the boom of the arcade craze, thanks to seminal games like Pac-Man, Donkey Kong, and Centipede.  As the decade wore on, video arcades were still plentiful, only now they were filled with the latest fighting games, like Street Fighter II and Mortal Kombat.  Outside of seeing Jodie Foster getting raped on top of one in 1988’s “The Accused”, pinball was out of the public eye, a relic of another time.

Pinball has its roots in bagatelle, a long-forgotten parlor game popular in the late 18th to early 19th century.  In this game, small ball bearings are launched via a spring-loaded plunger onto a sloped playfield populated with pins. 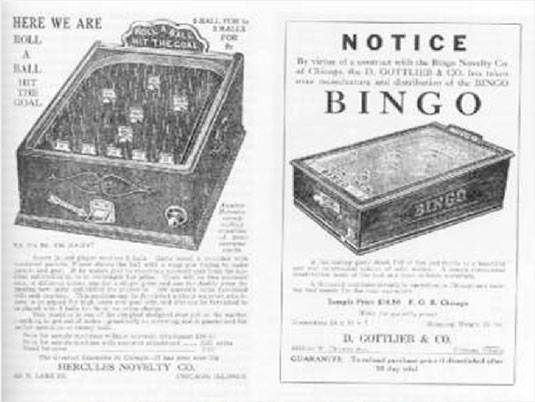 This game also gave way to Japanese Pachinko machines, which are basically like Peggle without buck-toothed gophers or rainbow-farting unicorns. By the 1930’s coin operated “pinball machines”, now powered by electricity, became popular in drugstores and taverns throughout America.  In 1947, flippers were added, making the whole affair more of a “skill-oriented game” than an exercise in “watching balls roll down a table for 20 seconds”.  Americans’ taste for entertainment in those days was sophisticated indeed.  The next few decades saw many technological advances in the game, but also a huge threat.  It seems crazy to think today, but pinball was blamed for many of the ills of America’s youth including truancy, delinquency, and many platform shoe injuries incurred by trying to imitate pinball wizard Elton John from the Who’s “Tommy”.  Young people were worse than they had ever been, and pinball was to blame.  Nowadays, the media would just blame GTA.  How times have changed.  J/k, they totally haven’t.  Worse yet, many, including New York City mayor Fiorello LaGuardia (the guy they named the airport after) associated pinball with organized gambling, and therefore crime.  The mayor himself destroyed dozens of pinball machines, and pinball was illegal in the state of New York for over 30 years.

Things that were not illegal during that time: driving your car home after 4 or 5 stiff drinks, forcing uppity black people to sit in the backs of buses, and giving your wife a smack in the mouth to “show her who’s boss”.

So truly this was a very dire time for pinball.  Fortunately for the game, then, it was an era of innovation and technological advances, with rockstar game designers like Pat Lawlor and Steve Ritchie turning in their very best work.  Ritchie’s “High Speed” evoked an adrenaline boost in the player, approximating a high speed pursuit by the police with quick looping shots and a lightning fast ramp.  Lawlor’s “Fun House” became an all time classic, thanks in large part to Rudy, a creepy ventriloquist’s dummy head embedded in the playfield.  The hideous imp glared at the player, talked trash, and gave small children nightmares, but he also achieved one key goal.  He got people playing pinball.  He got people excited about pinball. 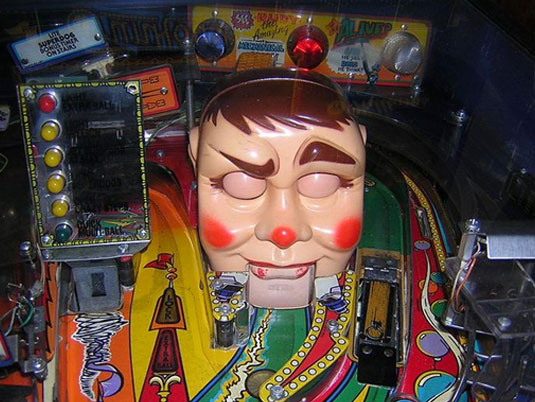 And just when it seemed that they would never return to arcades, mini-golf game rooms, pizza joints, and other places of family fun-time merrymaking, pinball staged an amazing comeback. More innovation followed.  The alphanumeric digital score display gave way to the DMD (dot matrix display), which not only communicated scores and other vital information to the player, but it allowed for incredible animations and video modes, undreamed of in the 80’s. 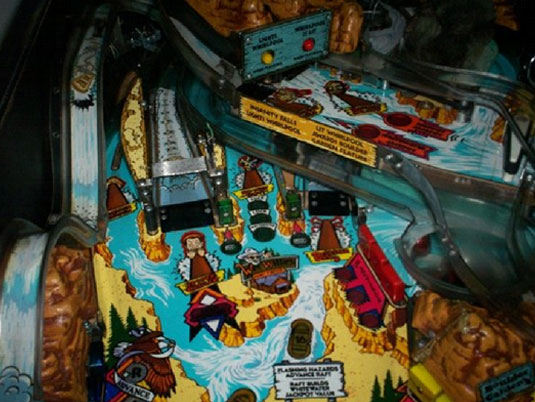 The 90’s became the second golden age of pinball.  Lawlor continued his string of successes with Addams Family (still the title holder of best selling pinball of all time, with a  record shattering 20,270 units sold) and Twilight Zone.  Bally/Williams (the two pinball giants had merged in the mid-80s) turned out hit after hit with their mostly licensed games.  Creature from the Black Lagoon, Indiana Jones, and Attack from Mars were just a few of the popular machines rolling out of their Chicago production plant in the early 90s.  Even video game companies like Data East and Capcom got into the pinball business, although their efforts did not pay off nearly as well.

After this pinball renaissance in the 90’s, pinball faced yet another challenge: modern gaming and simple economics.  Even though recent games like Medieval Madness and Monster Bash were earning admirably in whatever locations they were placed in, arcades themselves were fading away.  Home consoles like the Sega Dreamcast, Xbox, and Playstation2 were capable of producing arcade-quality graphics at home, and the people stayed away in droves.  Route operators and mini-golf magnates had to find other ways to draw kids in. Arcade cabinets and pinball machines began to disappear, replaced with ticket dispensing redemption games.  Small children now had their own kiddie gambling devices.  Instead of bellying up to the slots and gambling away the kids’ college fund like their parents did, they frittered away their allowance five and ten bucks at a time, only to trade in their tickets for a nickel’s worth of pencil topper. Upper management at WMS industries, the corporate parent of the Bally/Williams pinball brands delivered to their engineers and designers an ultimatum: make a more profitable machine, or we kill pinball.   The company already had a thriving slot machine business, which had a much smaller footprint and was infinitely more profitable than pinball.  Top designers from the company worked feverishly to save the game, and quickly turned around a prototype for the next evolution in pinball: Pinball2000.

Pinball2000 was equal parts ingenuity and desperation: a last ditch play to simultaneously preserve pinball and change the game forever.  By concealing a video game monitor in the head of the machine, and coating the top half of the playfield glass in a reflective, but still translucent material, game designers were able to seemingly “project” virtual targets and spinners onto the playfield.  No one had seen anything like it.  Some pinball purists looked down their noses at the bizarre-looking hybrid.  The first Pinball2000 machine, Revenge From Mars (a sequel to the successful 1995 pinball Attack From Mars), sold in respectable numbers. 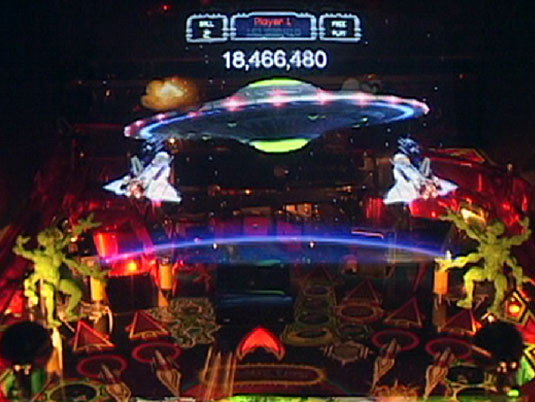 The next machine Star Wars Episode 1: The Phantom Menace was released soon after, and coasted on the name of the newly released Star Wars prequel, like the glut of licensed material produced to cash in on what will charitably be called “not George Lucas’ worst film ever”.  As long as Howard the Duck is out there, George, you’ll always have that.  Interestingly enough, Star Wars was also available as a “kit”.  The 2000 series was made to be modular, so when a machine stopped earning, an operator just had to swap the playfield out, burn some new game ROMs, and he’s off to the races.  There were more Pinball2000 machines in the prototype phase, but they would never see the light of day.  The powers that be at WMS declared pinball a lost cause, and some would say the fix was in.  They would’ve killed pinball regardless of the outcome.  In any case, on “Black Monday”, October 25, 1999, WMS shut down the pinball division forever, putting several of the industry’s greatest designers and programmers out of work, and leaving a hole in the heart of pinball fans everywhere.

So what has pinball been up to for the last 14 years?  As with all games, no good idea really dies, it returns and is rebooted, and is iterated on time and again for new generations.  Well, for starters, Gary Stern, a second generation pinball man of the old school, purchased the remnant of Sega Pinball, itself a restructuring of Data East’s old pinball operations.  He has been turning out a couple new commercial pinball machines a year, in enough numbers to support a small operation, and catering to route operators as well as the private collector.  Several of the old Bally/Williams/Gottlieb tables have been faithfully reproduced by Farsight Studios for their “Pinball Arcade” series, available on ios, Android, PSN, and Xbox live.  And they’re not the only console pinball game in town.  Zen Studios has produced a number of fantastic virtual tables for Zen Pinball using themes and characters from Marvel Comics, Star Wars, and Plants Vs. Zombies.  I highly recommend them.  You are more likely to find a pinball machine in a collector’s garage than in a commercial arcade setting these days, and you may feel saucy enough to pick one up off eBay or Craigslist.  I can also heartily recommend this course of action. 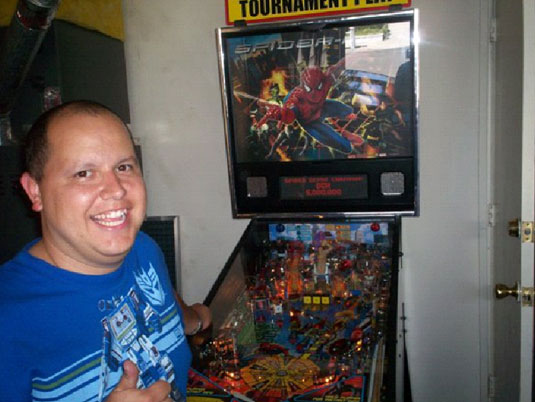 A gift to myself for quitting a crappy job, a 2007 Stern Spider-Man.

Word to the wise, though.  Buy a lot of extra parts.  When you have a steel ball traveling at high rates of speed surrounded by glass and plastic, you’re gonna have some breakage.  A pinball machine is a complicated beast with a lot of moving parts.  Learn how to restore them, or learn how to make friends that do.  I did a little of both, and I can honestly say I have no complaints.