If you have not yet played Telltale Games’ 2012 episodic Walking Dead game, you are missing out on one of the most engaging, well-written, thoughtful games of the last few years.  It breathed new life into the point-and-click adventure genre, and because supporting characters often lived or died based on your choices, it had gamers everywhere second-guessing their judgment.  You owe it to yourself to pick it up.  Available digitally via Steam, PSN, and Xbox Live, and soon to see release on the Playstation Vita, it is undoubtedly available for the platform of your choosing.  Unless your sole source of videogame entertainment is a Wii U, in which case, you have bigger issues at play than simply missing one of 2012’s best games.  If you have started the game, but never played through the season’s gut-wrenching final episode, why don’t you go do that now?  It’s OK, I’ll wait.

Done?  I know that was crazy, right?  Now that we’re all in the same boat, having to wait until the end of this year before we get to the first episode of the second season, might I recommend ‘The Walking Dead: 400 Days’ to tide you over? 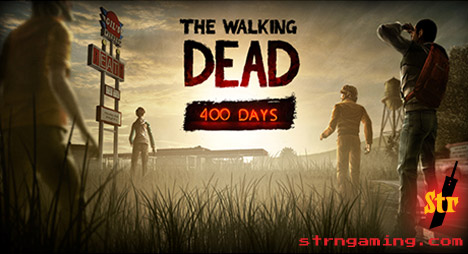 The diner/truck-stop the survivors call home

This single episode DLC acts as a prologue to season two, introducing five new survivors.  Although it is much shorter than any of the first season episodes (It took me about an hour and forty minutes to complete), it covers a lot of ground and provides an interesting back-story on these new characters.  Each survivor gets their own 15-20 minute segment during which, as in the previous season, the choices and alliances you make directly impact the story.  Some of the new cast members’ stories take place in a single environment, some carry over to a few different locations. 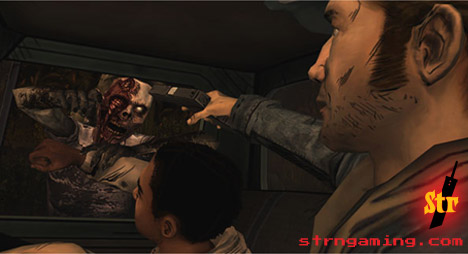 After completing all five stories, there will be a short epilogue where the survivors are approached with the opportunity to join a larger group of survivors at a nearby camp.  Who will go?  It depends on the decisions you made throughout the episode.  During my play through, only two of the five new characters decided to join up with the camp.  I’m guessing that the other three will be zombie bait before the start of the next season, but who can say?

As it was with The Walking Dead season 1, the emphasis is on drama and story.  There is very little in the way of “video gamey”-type action in this DLC.  I would say that is a positive.  The few times the series has fallen on its face are during action sequences.  It’s not what Telltale does best, and this series is an absolute powerhouse when it is focused on character relationships, sharp dialogue, and forcing the player to make some very difficult decisions.  You get that in spades.  Unfortunately, some of the earlier game’s audio glitches remain, but it’s a minor complaint against what is otherwise an outstanding installment in the series. 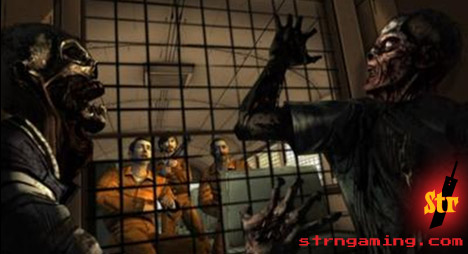 To alleviate overcrowding in the nation’s jails, some prisoners may be eaten.

Through all of the dialogue options, and all of the decisions that you are forced to make in order to survive the harsh zombie apocalypse, you will feel in control of where the story is headed.  This is an illusion, of course, but that is part of what makes the experience so special.  It is meticulously scripted, with the story beats plotted like a television show or movie.  Yet the game provides the player the agency to interact with the other characters in such a way that you will believe that you have had a huge impact in how the story played out.  This is downloadable content done right, and I recommend it (and the complete first season of Telltale Games’ The Walking Dead) whether you are a fan of the Walking Dead comic/TV show or not.