Lara Croft, where have you been?  After suffering a serious case of franchise fatigue, Square/Eidos has revived the best selling property with a big budget reboot.  For those of us who had the pleasure of raiding tombs with Ms. Croft in all her low polygon-count glory, back in 1996, it was an opportunity to start a brand new adventure with the lovely archaeologist/mummy-slayer, without being tied down by the lore of the previous games.  So, is it any good?  I’m glad to say that it exceeded all expectations. 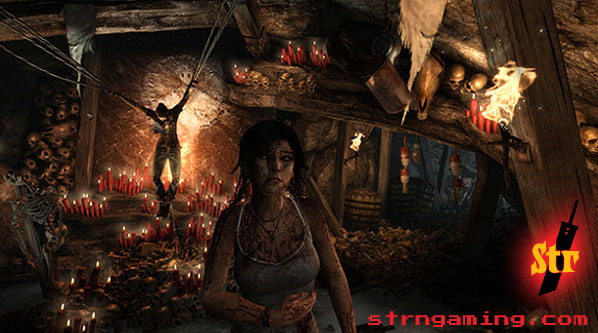 The game opens with a ham fisted introduction to the new, younger Lara Croft, and her supporting cast, cruising the Pacific Ocean in a research vessel in search of the island of Yamatai.  Like all popular entertainments of this kind, the efficiency of the plot can be measured directly by “how long does it take to get on the island?”  See also: Far Cry 3, Jurassic Park, The Island of Doctor Moreau.  On second thought, don’t see the Island of Doctor Moreau.  Or do; it’s your funeral.  Fortunately for us, the ship gets wrecked on the island in short order, and Lara quickly encounters her first of what will certainly be hundreds of crazed cult members living on the island, and worshipping Himiko, the “Sun Queen”.  They’re a fun bunch of guys.

Lara spends most of the game playing a deadly game of hide and seek with these wacky cultists, gradually picking up new weapons and skills along the way.  The beauty of the game is tying Lara’s inexperience to a well balanced upgrade system.  She does not start the game a gun-wielding, rock climbing badass, but by collecting scrap to upgrade weapons, and using experience earned in combat to unlock new skills and attacks, she becomes a force to be reckoned with.  Much was made in pre-release hype about the character’s vulnerability, but I feel that the game does a pretty good job of allowing the player to run and gun from the outset, and improving from there.  It’s a difficult balance to strike, allowing the character weakness as dictated by the plot without hampering the player’s agency in the game, but they’ve done it, and done it quite well. 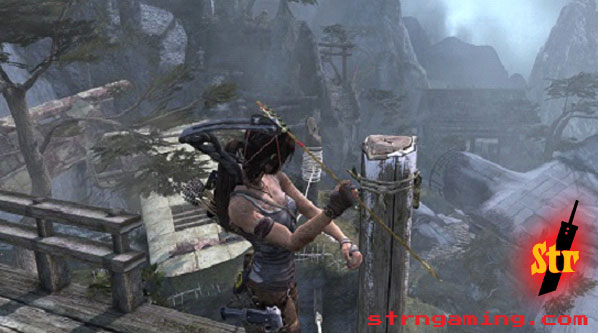 Zipline arrows – you’ll wonder how you got along without them.

The island itself is huge, and it gives you a lot of caves, cliff faces, wrecked structures, and yes, tombs to explore.  It never overwhelms, guiding you on a very strict path at the game’s outset, then slowly branching out and opening new paths to you as you proceed through the game.  One of the best features of the game is how new areas open up to you, once you have unlocked a certain weapon or skill in a Metroidvania-type way.  For example, you will receive a basic bow and arrow very early on in the game.  While this is good for hunting, and putting holes in the heads of bad guys, it doesn’t do much more than that.  Get rope arrows, and now you’ve got a handy tool for crossing chasms and reaching areas that were previously not available to you.  Grappling hook arrow heads add another level of usefulness, as they can be shot into rope surfaces and pulled.  This might have several practical applications, such as bringing a box of supplies down to your level, or ringing a large bell.  You could fire these up at enemies, then pull them off their watchtowers and watch them fall screaming to their deaths.  I won’t judge.  The game is almost perfectly paced, giving you a new weapon or skill just before the last one loses its appeal.

I can’t believe I’ve gotten this far without talking about the graphics.  This game looks amazing.  As a late-generation game, Tomb Raider squeezes all the juice it can out of the aging PS3 and Xbox 360, generating gorgeous visuals of the Pacific Island locale, fiery explosions, and Lara herself.  The World War 2-era bunkers and abandoned military equipment that make up the landscape of the island are rendered in stunning detail.  Animation is smooth, with very few dips in frame rate.  Bottom line, this game is as beautiful to look at as it is to play. 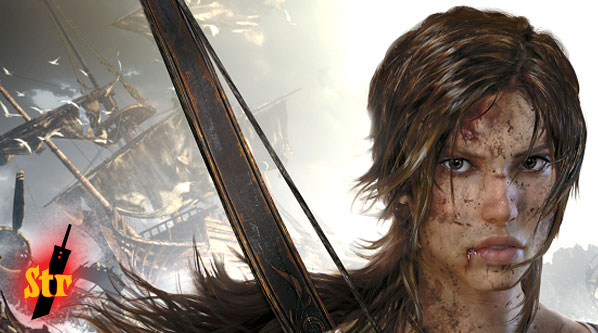 Tomb Raider packs a lot of gameplay value for your buck.  In addition to the 14-15 hour length of the single player experience, you may find yourself scouring the island for collectibles, which take the form of artifacts, notes, or GPS coordinates.  Raiding tombs, despite what you may expect from a game called Tomb Raider, is not integral to the plot at all, and these puzzle-like challenges can be seen as optional side quests.  There is a multiplayer mode as well, but it feels largely unnecessary.

In the several years between the last good Tomb Raider game, and the March 2013 release of this game, Lara Croft found her place as top dog in the adventuring game usurped by Nathan Drake of the Uncharted series, and several others.  I’m glad to report that Square’s Tomb Raider acquits itself quite well, and holds up against Naughty Dog’s best work.  If I had to judge, I’d say TR is better than Uncharted 3, and maybe a notch below Uncharted 2.  That is high praise, given my love of those games.  Do yourself a favor, and buy Tomb Raider.  Even in a year packed with top-rated games like The Last of Us, Bioshock Infinite, and GTA 5, Tomb Raider is outstanding, easily one of 2013’s best.