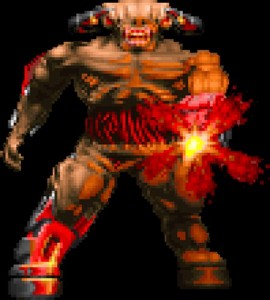 Hardcore midi’s and pixelated gore, my kind of game. I remember loving Doom simply because of how sick and twisted it was compared to other games of its time “Finally something my style”. Before Doom we had Wolfenstein 3D, though revolutionary for its time, Nazi’s were still human. The first game I’ve ever played that had such a twisted plot and Demonic baddies. I remember the roar of bulldemons and the hiss of cacodemons. Doom was subtleties like, the trickle of adrenaline you got when you heard an imp off in the distance. The fear that doom instilled was unequalled by any game during that period and it was amazingly addicting!

The twisted abominations the game creators came up with were uncanny! Hell Knights, Lost Souls and revenants were just a few of the beasts you had to deal with. I could play Doom for days, all the levels, all the difficulties. I would set it to nightmare when I was feeling numb just to experience pain once again. And who was more Badass than the Cyber Demon? No one that’s who! I swear Doom set the standard for scary sound effects for years to come. To this day I still hear the screeching sliding door sound effect in movies and games. Also I know I have heard the same demon grunts in various media – OOooooorrgggggggg!!!!!!

Each level was more twisted than the last, human skin wallpaper and alters with various body parts and organs. OH the Pixelated Horror! The experience was truly unqiue. Black candles and skulls everywhere, you could almost smell the arid stench of decay and brimstone.

When the game couldn’t keep up with me I discovered the world of level editing. Eureka! I can now make my own twisted incarnations and labyrinths. I tried to make them as horrifically atrocious as possible. I would build large hidden platforms shaped like pentagrams that would rise on trigger to surprise my unsuspecting victims with loads of hellspawn. I started with the first DOS editor that was available I believe it came with my copy of  “3D Game Alchemy for Doom, Doom II, Heretic, and Hexen”. It was the Unholy Bible of level editing. I do believe diving in the code of Doom was what sparked my interest in a career as a web developer much later on in life.

You felt so powerful creating a fresh .WAD, like an Unhallowed Game God. I even had fun with the errors. Once when I went to test my .WAD  the Dos Prompt gave me the error “Bojo Hackman Yes/No?” and the test wouldn’t start. Troubleshooting my issue I found I had forgotten to add a start point for the player. My friends and I figured that his name must be Bojo Hackman since he was what we forgot? I didn’t think I’d had this much fun building levels for friends since AD&D’s Unlimited Adventures.

Doom has always been one of the best time killers I’ve ever experienced other than my first MMO… Ah, good times, I’ve actually been listening to the original Doom Midis while writing this.

4 comments on “Union Aerospace Wants You!”