Home › News › New Mega Evolutions for Pokemon ORAS… But Is One A Joke?!

New Mega Evolutions for Pokemon ORAS… But Is One A Joke?!

Everyone’s been buzzing about the upcoming remake of the popular Pokemon installment Ruby and Sapphire, (originally made for the Gameboy Advance in 2003 and now revamped for the Nintendo 3DS) and one thing every Pokemon fan is excited about is the continuation of Mega Evolutions that debuted in the Pokemon Company’s most recent installment of X and Y. New Mega Evolutions will be featured in ORAS, and we’ve already discovered the badass Mega Metagross, the sleek Mega Salamence, and the slightly less cutesy Mega Lopunny. Surely there must be more! 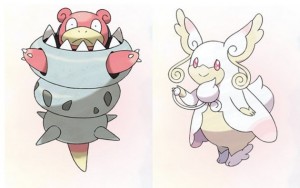 While Mega Audino has since been officially announced, Mega Slowbro is left as what some people are calling the “joke Mega.” And it’s pretty easy to see why! While plain old regular Slowbro looks happy as a clam, (obviously not the one on his tail, that Shellder looks pretty pissed) Mega Slowbro looks mortified and confused. The poor guy is trying to stand on its tail while being consumed by a clam, for crying out loud! Because of his strange and silly appearance and his absence of an official announcement, we’re all left wondering if he will have an announcement at a later date or if he actually is indeed a joke.

Let’s take a look at Slowbro for a minute. In my opinion, its Mega Evolution clearly is no longer a symbiotic relationship between a Slowpoke and a Shellder. I mean, Shellder already looked pretty angry on Slowpoke’s tail before it Mega Evolved. Either Shellder is tired of riding caboose and wants the spotlight or he wants the choice meat rather than a dinky tail. All the while, poor Slowbro is confused as to why his Mega form, which he would think would make him some crazy, huge and powerful beast, is actually EATING HIM ALIVE. That’s not Mega, that’s depressing! At least he can take comfort in his ability Shell and his higher Defense and Sp. Defense stats.

For those of you wondering about our super cute Mega Audino, Serebii reports that it is a Normal/Fairy type and it is equipped with the ability Healer. Its Sp. Attack and Defense stats are ramped up as well.

What are your thoughts on our new Megas? Do you want to see Mega Slowbro in action? I do… I think it’d be pretty entertaining.