Home › Exclusives › Are Video Games The Next Blockbusters?

Are Video Games The Next Blockbusters?

The voice acting in video games is moving them closer to being the next blockbuster films. But it isn’t just the powerful voiceovers that are getting all the credit, the story-lines and cut scenes are increasing in quality with every best seller. However, the voice acting in games by itself has almost brought video games to the level of movies. With every single prompt and scene these actors are bringing your favorite characters to life. With more money now going into video games, the level of voice actors is rising. From David Hayter to Kojima’s announcement of Kiefer Sutherland as Punished Snake, Hollywood actors are increasing in video game voiceovers. That being said, there are a lot of big names in video games such as Ellen Page, Willem Dafoe and Mark Hamill to name a few. 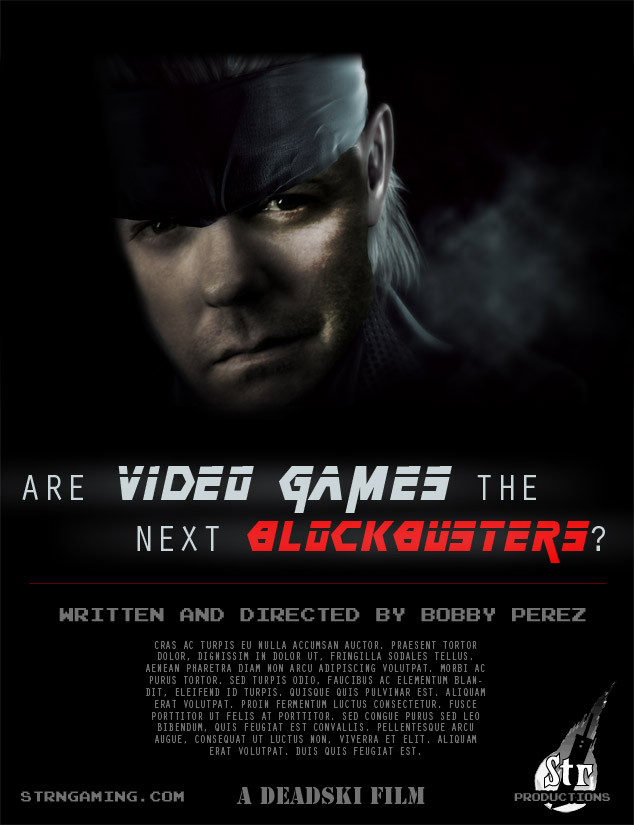 A lot of fans are shocked by the decision of Kiefer Sutherland being cast for Punished snake in Metal Gear V, myself being one. But what we should take into consideration is Hideo Kojima’s reputation for misdirection. As an example let’s look at Metal Gear Solid 2, with this sequel Hideo showed Snake and Otacon throughout the demos, which is what fans expected. However, to our surprise Raiden, a new main character, is played through 90% of the game. There is no mention of Raiden on the box or previously shown during the demos. With this in mind you should take Kiefer Sutherland replacing David Hayter as the voice of Snake with a grain of salt. Whatever the case, Kiefer Sutherland’s attachment to this project is important because it shows that the industry is willing to shell out enough cash to get big Hollywood names attached to these games. Many big name actors have voiced video game characters before but rarely took center stage as the main character. Breaking from that norm, Ellen Page will be voicing Jodie Holmes in Beyond: Two Souls, a title that looks less like a video game and more like a Hollywood blockbuster. The upcoming titles raises the question, are video games the next blockbusters?

Looking back at the old days of 8bit castles, bats, swords and lasers, stories took a back seat to the action. To get the story on why exactly you were saving the princess or battling in space you had to read the manual. Level one just started you off without much to go on, but that was accepted back then. As far as we cared Link, Mario and Pac-Man didn’t need a story or motivation to make us keep playing. Just simply playing was good enough. In those days video games weren’t taken very seriously, the same way cartoons or films weren’t when they first started.

In 1878 The Horse in Motion started the strange and frightening illusion of motion pictures. At first just a neat trick, and then stories were able to be told through this new medium. It took decades for people to understand, film is something that can touch you like any form of art. But I’d be lying if I told you that movies became what they are today just because of the love of the art, money is and always has been a factor. It was a business back then and still is today. But even in the 1920’s when it started to take shape, people didn’t take film seriously.

In the early days of cartoons the “voice over” talent was something people didn’t think twice about. One man changed it all and to this day has never been topped. If you’ve ever seen a Looney Tunes cartoon you have heard his voice. He voiced Bugs Bunny, Daffy Duck, Porky Pig, and so many more. He was the first to be credited for voice acting. This meant a lot back then, as I mentioned no one could put a real name to the voice.  With “Starring Mel Blanc” in the credits people knew he did all the voices they came to recognize. This also meant they had to start paying the voice actors more, which helps you understand why the studios took so long to start doing it.

The aforementioned mediums started out seemingly unimportant and became something everybody takes very seriously. Video games too are heading down this path. At some point people started to care about how the characters and the story were presented. This ushered in bigger cut scenes and more voice acting. On the downside video games have evolved into something we can nitpick for more than just the gameplay. I agree with some that video games aren’t quite on par with movies yet. The scripts and action cut scenes in some games are worse than B movies. It’s going to take a while before the gamers and the industry set a standard. But in the mean time you and I can witness history in the making. Games today are taking the chance to express our philosophies and culture. The gaming industry isn’t scared to ask what morals mean to us or what identity really is; even the taboo of questioning religion is not out of reach. From gory gunplay in FPS’ to lighthearted platformers, we find choices we make in games that reflect our real lives.

Now, does that mean I think every game coming out is a masterpiece? No, there are a lot of games just trying to cash in. The very few I’m talking about are being acknowledged and given credit or at least hopefully setting the standard. Regardless, the gaming industry is trying to tap into something that helps us understand the human condition. So we ask ourselves, do we want games to be pumped out like the Fast and Furious series or the Twilight saga, cheap, fast and easy to make? Or do we want games to be thoughtful, disturbing and enlightening like Citizen Kane or 2001: A Space Odyssey? Whichever the direction it takes, know this, the industry is always evolving.

One comment on “Are Video Games The Next Blockbusters?”