I’m assuming if you were anywhere near the internet last week, you managed to catch the first gameplay reveal trailer for Rockstar’s upcoming Grand Theft Auto 5.  The series has been the delight of gamers and the bane of anti-gaming lobbyists for over 15 years now.  To me, the GTA games strike the perfect balance between trenchant public commentary and crass dick jokes.  For what it’s worth, the series has sold nearly 125 million copies to date, and are among some of the most critically acclaimed games ever released.  GTA 5 is expected to be a massive blockbuster upon release, and while not a lot of story specifics are available, here are a few cool features that I think gamers will be freaking out about when the game finally arrives on September 17th.

For the first time in a GTA game, you will be able to control three different protagonists, switching between them during lulls in the gameplay, or even in the middle of a mission.  The characters seem like the usual Rockstar archetypes: world-weary bank robber Michael, ambitious hood rat Franklin, and Trevor the scumbag.  The ability to change characters on the fly is new to the series however, and should put a fresh spin on the usual GTA formula.  Interestingly enough, the main characters will go on living their sordid, sleazy lives while you’re not controlling them, and could be in the middle of something when you switch over.  What will Trevor be up to when you want to take him out for a spin?  Given as we see him trying to flush a severed foot down the toilet in the trailer, maybe we don’t want to know. 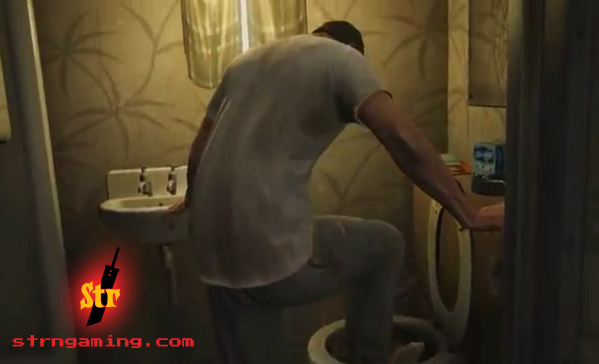 “Heeeey, my cousin!  Let’s go bowling!”  In GTA 4, I can’t tell you how many times I got that phone call from obnoxious cousin Roman.  I screened his calls like I owed him money.  What was that guy’s deal?  Why did he like to go play darts so much? And why did he only call when I have a parade of cops chasing me down the freeway like I’m AC Cowlings driving OJ’s getaway Bronco?  The side activities in the last game were certainly hit or miss.  So why do I find myself excited about all of the things I can run around town doing, when I should be concerned with actually playing/finishing the game? Perhaps it’s the variety.  So maybe you’re not an outdoorsman, and hunting, scuba diving, and bike riding are not for you.  Maybe investing in a virtual stock market or buying/selling realty is more your cup of tea.  In any event, there is a lot to do here. 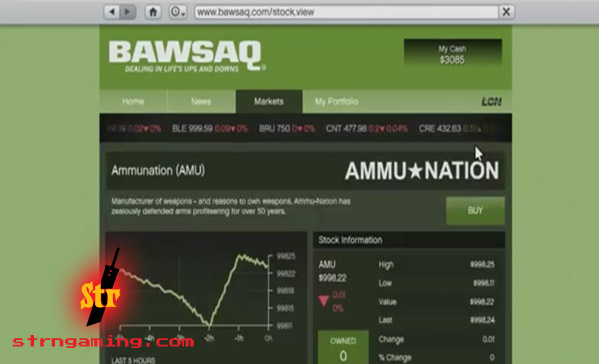 At the tail end of the trailer, we saw a five second snippet of online play, and while that doesn’t give us much to go on, the series’ history has made it pretty clear that online play is where it’s at.  Understanding the draw of GTA online is not difficult.  Who doesn’t want to run around a huge online world (the map is reportedly bigger than the playable areas of GTA 4, GTA: San Andreas, and Red Dead Redemption combined) stealing jet skis, running over pedestrians, and lighting people on fire in a consequence-free environment?  Now add a dozen of your deviant friends, and you’ve got a party.  One reservation, though.  The trailer did show an online participant flying what appeared to be some kind of fighter jet.  No need to go full “Saints’ Row” on us here, Rockstar.  Simple team on team carjacking and shotgunning mayhem is good enough for me. 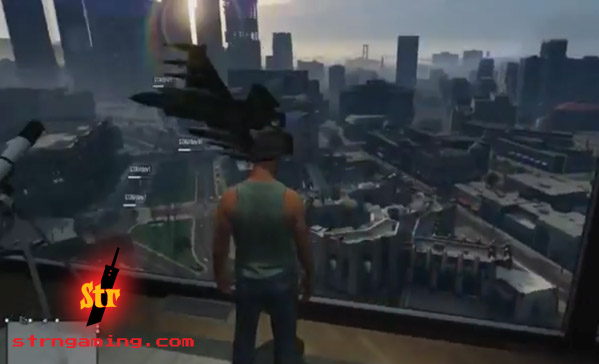 This guy’s apartment appears to be located somewhere on the highway to the danger zone.

So where will I be on September 17th?  Buying this game, I’d imagine.  Where will I be for the couple months that follow?  Who knows.  Not at work, probably.  I imagine that I will still be playing GTA 5, bleary eyed, in the middle of a dimly-lit room, surrounded by mountains of empty pizza boxes, and several jars containing my urine.  See you then!